Both the Bocuse d’Or and yours truly had a birthday last week. The biannual French cooking competition turned 30, and we celebrated our….well, let’s not spend too much time on details now, shall we?

Because ELV and his staff will use any occasion as an excuse to go to Europe, we hightailed it over to Lyon to watch the competition for ourselves. (It was our second time in attendance, which we will discuss more about below.) Along the way we drove 2015 kilometers, visited 4 countries, sampled 46 cheeses, dozens of wines, and bathed in the light of ten Michelin stars. As usual, we like to chronicle these things for posterity’s sake, and for any travel plans our loyal readers might have in the future, so without further ado, here is a snapshot of what we experienced, in all of its gastronomic glory.

Yes, it was a pretty big deal in the insular world of French gastronomy that America’s two-man team finally beat the likes of Norway, Iceland, France and Morocco(?) in the “Olympics of Cooking.” But some people didn’t see it that way. In his “Three reasons why we still don’t care” article for Eater National, Greg Morabito posits that the esoteric nature of the Bocuse d’Or, lack of story lines and non-TV friendly format doom the event to forever be a food footnote on this side of the pond. And in some ways he has a point.

But he also misses it.

The whole point of the Bocuse d’Or is that it is very, very French, read: insular, esoteric and inscrutable. It is also about the two things that define French cooking: consistency and perfection. French cooking (at least on this level) is about restaurant cooking. And restaurant cooking is about repetition and perfection – being able to execute dishes requiring an extremely high level of technical skill consistently over an entire service. Since the time of its kings, French cooking has also been about elaboration — gilding the lily if you will — which is why the presentation of enormous platters of proteins is so central to the event: 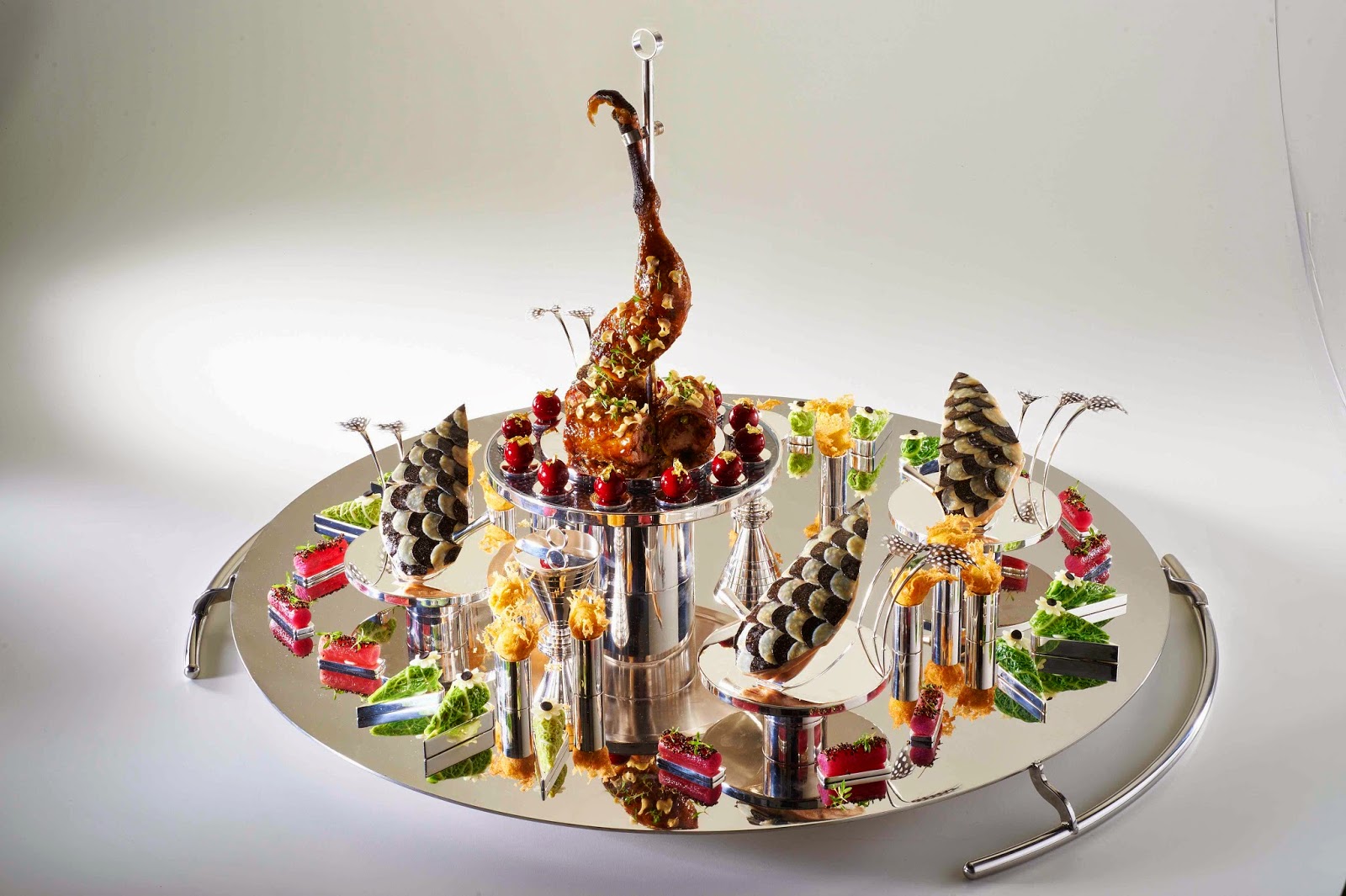 But once again, like all amateurs, he misses the point. French food is also about extraction and intensification — the making of each individual ingredient taste more like itself than one thought possible. Yes, these dishes may look almost inedibly elaborate, but every bite must purely express the essence of each ingredient, and there are more techniques in play on a plate like this: 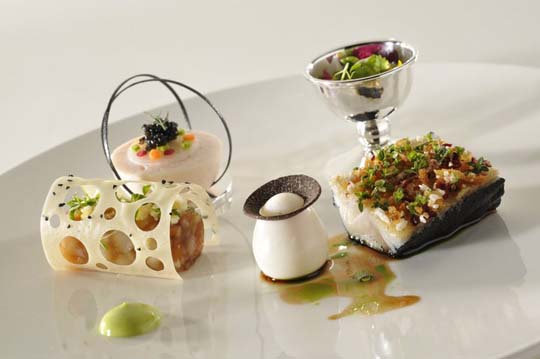 …than most Top Chef contestants could execute in a month of Sundays.

Regretably, this year, in a bow to modernity, there was even a requirement for vegan dish: …which, I think, also misses the point. Because if there’s one thing French food is not about, it’s vegetables. Food and wine in France are inextricably intertwined, and one of the reason the food is so good is because the wine is so good, and vice versa. And French wine is made to go with protein, be it a belon oyster or a haunch of beef. When you find a wine-vegetable pairing that knocks your socks off, let me know.

So, to summarize: the Bocuse d’Or is about French, not American sensibilities, and our best chefs are sensible enough to know that it is the king of cooking competitions. It is to American reality food programming what Olympic diving is to a belly flop in your pool. Let’s hope it stays that way. Just because the audience for Guy’s Grocery Games doesn’t get it doesn’t mean the powers-that-be need to change anything. Except that pointless “vegetal” requirement.

The reason the United States won — represented by Mathew Peters and Harrison Turone — this year has to do with one thing (besides their obvious talent): money. To be precise, the money and culinary horsepower provided by America’s two best French chefs: Daniel Boulud and Thomas Keller. Neither is as well-known to the average Food Network viewer as Guy Fieri, but both bring enormous credibility to the event, along with providing the time and the tools necessary for Peters and Turone to rehearse and train for six months solid leading up to the big week.

Because of Boulud and Keller, and Jerome Bocuse’s courting of them, and the Venetian/Palazzo decision (led by our very own ami Sebastien Silvestri) to sponsor the American competition, we finally had some heavyweight backing to go with our oversized ambitions in the culinary world. (America may never be the equal of France, Italy, Japan, Spain or China  when it comes to cooking talent or raw ingredients, but our culinary education/training has made tremendous strides in the past twenty years.)

And because of it, we beat the world this year, so that’s something to be proud of….even if statements like this from Eater half-wits:

Recent TV hits like The Great British Bake-Off and a Chef’s Table prove that American audiences are interested in culinary stories and competitions from other countries — so long as the food looks delicious, and the stories are compelling. Maybe with that in mind, the Bocuse crew could make some changes to the programming that would make the event more accessible to the people from this year’s victorious food country: America.

…are enough to make Mathew Peters want to go back to flipping burgers.

Final footnote: Ten years is a long time. In the decade that passed since my first Bocuse d’Or, everything has expanded in significant ways — ways that bode well for the event’s popularity and reach in the future, but in a manner that made it much less fun to attend. Ten years ago, I was one of maybe eight Americans at the event, and half of those were relatives of Gavin Kaysen – America’s cheftestant representing the old Stars and Stripes. This year, there seemed to be a couple of hundred of our countrymen there, making a lot of noise and cheering our boys on to victory. In 2007, there were no VIP sections, roped-off areas, or designated press stations. Then I saw at most a few camera crews and maybe a dozen or so reporters roaming around. Roaming around (the chefs and the judges) was something that we easily did, and is how I chatted up everyone from Heston Blumenthal to Paul Bocuse himself. Imagine my surprise when I entered the arena last week (after an hour of standing in line), and saw hundreds of reporters and dozens of camera crews all segregated behind a “press wall” (see below) — everyone being scrutinized by enough beefy security to handle a Rolling Stone’s concert. 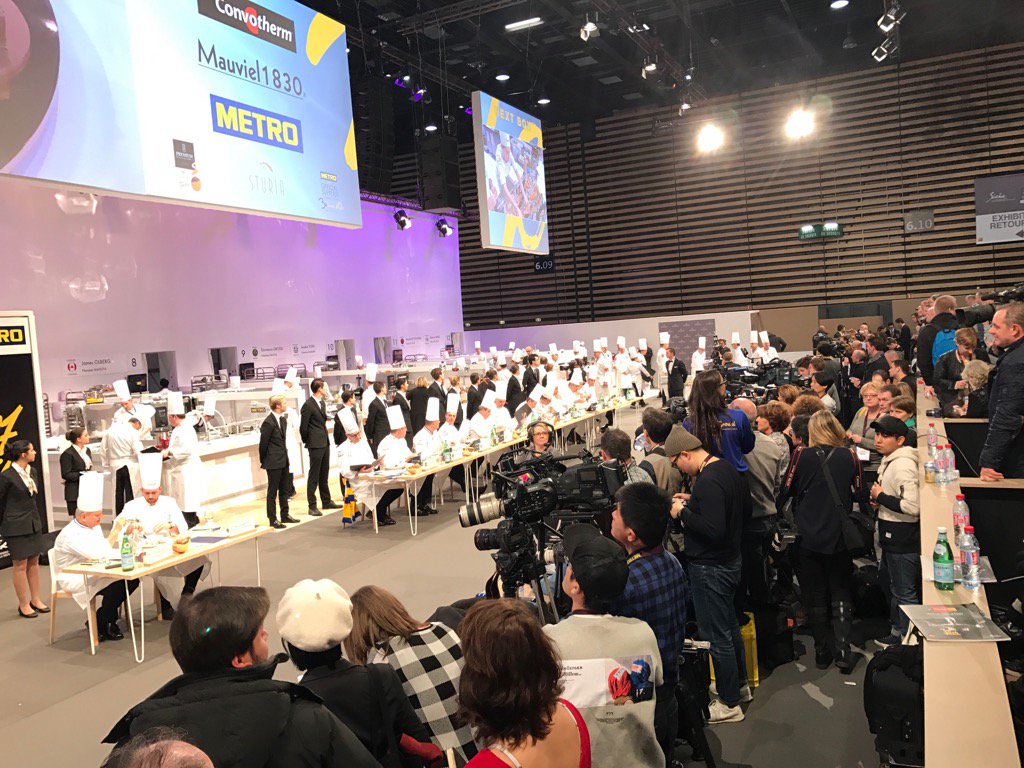 All of it — the press, the cameras, the VIPs and the security — announced to us that this had taken the world’s stage. No longer was it a Euro-centric event on the order of some Alpine skiing championship; this was the big time now, and they want you to know it. With America’s win, the Bocuse d’Or is poised to get an even wider audience. This is good for the event, and France, and French chefs, and our chefs and French food in general. But I couldn’t help but feel a sense of sadness when I saw how everything had changed…because changed it has. It is no longer a very esoteric cooking contest that exists only for the cognoscenti  — a hyper-precise test of skills (akin to a classical music competition) that once made me feel like a very special part of it. For I am a part of it no more. Now, it belongs to the world, and to the great international media machine. (sigh)

This is the first of a two part article on ELV’s recent trip to France, Germany and Switzerland. Next up: the restaurants.

Daniel Boulud doesn’t need me or any other writer to sing his praises or cement his place in American gastronomy. For 30 years he has been a one-man French Revolution — educating and dazzling palates with the best of La Cuisine Français, as well as introducing America to the joys of the gourmet burger.

END_OF_DOCUMENT_TOKEN_TO_BE_REPLACED

French bistros are about as hip as a dickey. They’ve been around for over two hundred years, and there is nothing fancy about them (or the food they serve). But if you want to do them well, certain formulas must be followed and menus and rules adhered to.