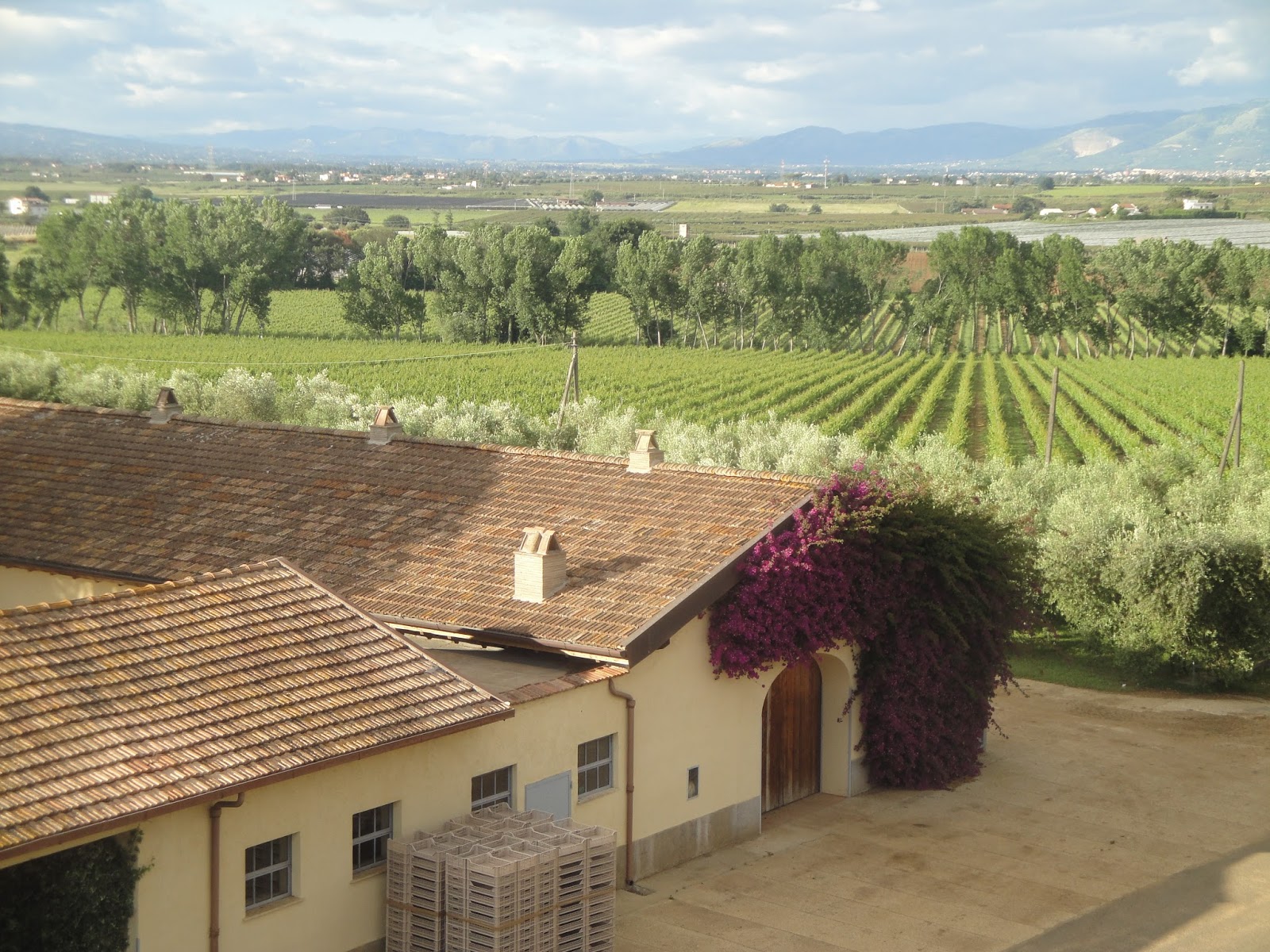 If Cincinnato and Marco Carpineti represent Roman vinters moving forward by looking to the past, Casale Del Giglio is a winery of a much more modern stripe. Located on the slopes and plains (and some former marshland) some fifty kilometers south of Rome, it utilizes its 180 hectares of vines to make an assortment of varietals that stretch the boundaries of what Italian wines can be.

Along with wine journalist Charles Scicolone, we toured the winery with winemaker Paolo Tiefenthaler who explained that the area, being located on sandy soil in the Agro Potino valley near Anzio, did not have much of a wine-making tradition before they started cultivating it back in the 1990s. Teifenthaler told us through an interpreter that they saw this unexplored territory as being perfect for viticultural experimentation — it having a temperate maritime climate similar to those found in Australia, California and Bordeaux. As a result (and with the full blessing of the European Union), over sixty different varietals were planted to see what grew (and tasted) best. With such a broad canvas to work from, Tiefenthaler arrived at a stunning assortment of wines — fifteen in all — that aim to bridge the gap between classic and international tastes, as well as solidifying the area as a microclimate to be taken seriously. 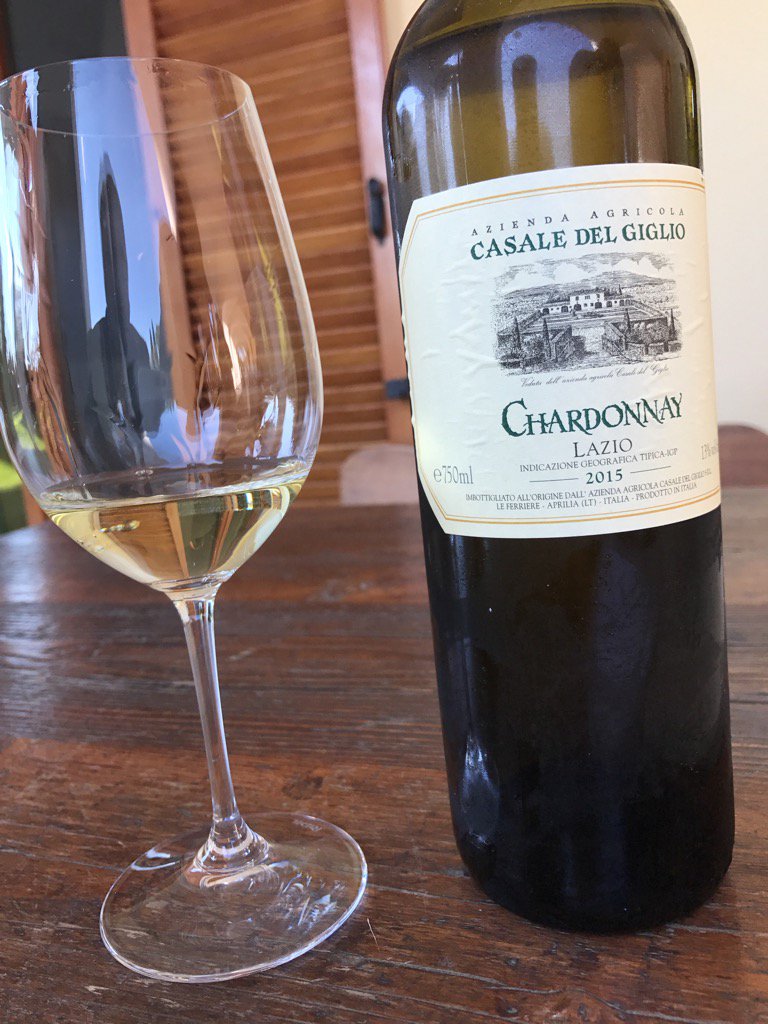 One very un-Italian thing about Casale Del Giglio’s wines are the labels. In a nod towards the international market (and in breaking with the traditional Italian wine labels – the motto of which has always been: “obscurity and confusion over clarity and information”), their bottles identify the maker, the grape (if it’s not a blend) and the location of the vineyard. Most of their wines are classified as IGT (Indicazione Geografica Tipica – the third tier of Italian wine classification) which allots more freedom to winemakers to use different grapes and blends than the more restrictive DOCG and DOC denominations. 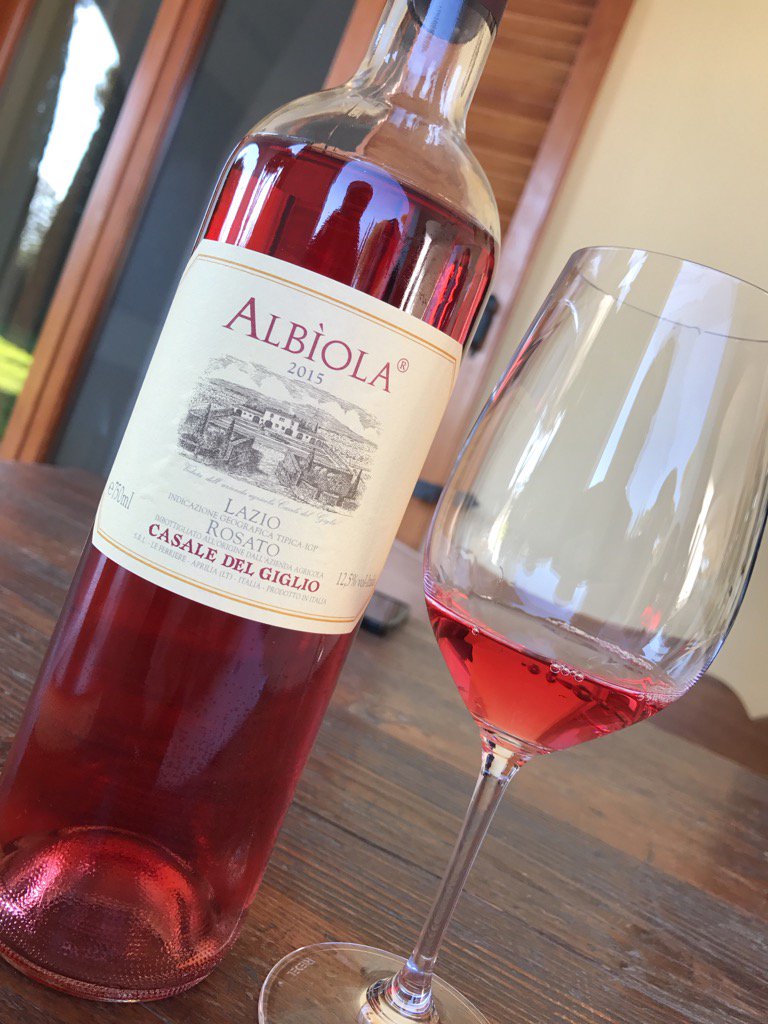 Triefenthaler takes that freedom and runs with it. His chardonnay uses no oak and goes through no malolactic (secondary) fermentation. The result is a full-bodied, crisp wine that is a pure expression of the grape. It was one of many non-traditional wines we tasted that caused me and Scicolone to sit up and take notice. Just as pleasantly surprising was the Albiola Rosato — a rose of Syrah and Sangiovese grapes — that was surprisingly rich for a wine so pink. It’s strong acidity and raspberry/strawberry aromas make it a perfect wine for sipping all Summer long.

On the more traditional front, Casale Del Giglio weighs in with a big, spicy, tannic, vaguely herbaceous Cesanese (pictured above) that Elise Rialland — our winery guide for the day — said goes perfectly with a Spezzatino di Bufaletta dell’Agro Pontino (water buffalo stew). Absent any water buffalo in your neighborhood, a beef stew would match splendidly as well.

Of the other red wines we tasted, the huge, sweetly tannic Tempranijo was a monster that needs taming by food or aging, and the 100% Cabernet Sauvignon showed promise as well, although, like many of the reds, it seemed quite young, very fruit-forward and a bit rough around the edges. Still, when you consider that these wines retail for well under twenty dollars a bottle, you’re getting quite a mouthful for the price. 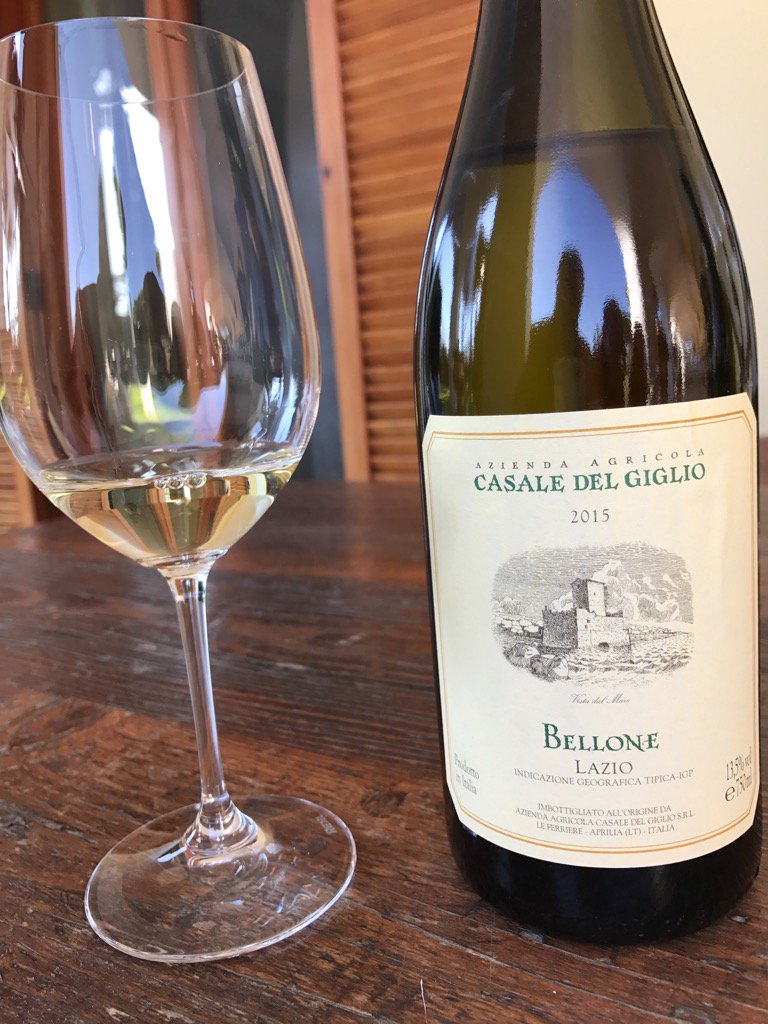 Two wines that need no qualifiers are the Bellone and Mater Matuta. The Bellone is yet another worthwhile way to break the bonds of your chardonnay, sauvignon blanc, or pinot grigio habit — it being a complex and subtle blend of ripe tropical fruit beneath a nicely floral nose. What sets it apart from your run-of-the-mill $15 white wines is the strong acidity and a bracing finish that tastes like a sea breeze smells. I can’t think of a better wine to accompany a fish stew or raw seafood platter. If the Bellone is an ode to the ancient varietals of Lazio (the province of Italy wherein Rome lies), the Mater Matuta represents a leap into the 21st Century. Elegant and powerful, this flagship wine is a blend of 85% Syrah and 15% Petit Verdot, and displays a deep, dense ruby red color, and complex aromas of black cherry, coffee and about half a spice rack. The tannins are finely integrated and the finish lasts until next Tuesday. In all, quite a bottle for $50, and quite a landmark for an area that had no idea it could make such a splash with grapes that had never before spoken Italian.

Old school or new, Roman wines have broken the shackles of cheap white wine that defined its viticulture for so long. Tasting the full panoply of Casale Del Giglio wines (including a wonderful late harvest wine called Aphrodisium) taught me that no longer will I look past the “Lazio” designation when I see it in a wine store or on a list. These are very attractive wines at very attractive prices, and all of them are made to match with Roman food, one of the world’s great cuisines.

A FEW WORDS ABOUT ROMAN RESTAURANTS

“To a Roman, wine is just another form of food.” Charles Scicolone reminded me of this several times as we tasted our way around Rome for a week. What he also impressed upon me was that Romans (who are very serious about their cuisine) look upon wine as an integral part of any meal, but, being Romans, don’t exactly stress out over it. You’ll never find a Roman dissecting the fine points of a food and wine match. Certain fundamental rules are followed (lighter wines with fish, heavier ones with meat), but after that it is all about enjoying them simultaneously. Here are a few restaurant and wine bars where you can maximize your enjoyment of both in the Eternal City.

Il Sanlorenzo –  Despite being 45 minutes from the ocean, Rome has never been much of a seafood town, until now. This elegant, seafood-centric place, a block off of the Corso Vittorio Emanuele II, proudly displays the daily catch at the front bar, offers six kinds of Le Acque (mineral water), artisanal breads, and stunning selection of raw seafood. It’s 85€ tasting menu is quite the bargain, and the modernist carpaccio of red shrimps just as satisfying as the artful twist on linguine con vongole.

Flavio al Velavevodetto  – The trouble with traveling to Rome (as with New York, Paris, Tokyo, etc.) is I’m always torn between classic places to which I can’t wait to return, and wanting to try out newer joints that everyone is raving about. Thankfully, Rome doesn’t follow food trends as much as the rest of the world, so it’s easier to ignore whatever some travel magazine is writing about this month. Flavio de Velavevodetto has been around forever, and isn’t on anyone’s thrillist, but the food is Roman to the core. A wall of wines greets you as you enter (and doubles as the wine list) and the menu couldn’t be simpler. The rigatoni con la pajata (with veal intestines) and coda alla vaccianara (braised oxtail) also could not be any better. “Velavevodetto” means something like a Roman “I told you so,” and after two bites of your meal, you will have to admit that I told you so.

Checchino dal 1887 – Right around the corner from Flavio al Velavevodetto is this venerable establishment, that is just as comfortable and just as good. Specializing in the “fifth quarter” of the animal, the menu is a testament to how Romans were into offal long before it became fashionable. Wonderful wine list as well.

Dal Bolognese –  I never go to Rome without taking at least one meal here. Directly off the Piazza del Popolo, you enter this fashionable haunt of power lunchers and well-healed shoppers. The thing to get is the bollito misto with mostarda and salsa verde. There might be other good things to eat on the menu, but the meat platter with mustard fruits is so spectacular I can’t even think of ordering anything else. Except the fritto misto (fried seafood); it’s out-of-this-world too.

Al Moro – There is an old saying about Roman restaurants that the worse the art is on the walls, the better the food. Al Moro’s walls won’t win any awards (see picture above), but the fegato (calves liver with agrodolce onions) ought to be enshrined somewhere. You won’t find better culatello ham or bufala mozzerella anywhere else around the Trevi Fountain, either. Go early for lunch to see how the smart business set enjoys its midday repast.

Roman ristorante are far less formal affairs than their Parisian counterparts. Still, you’re expected to order two or three courses in them, and they are not the place to pick up a light bite. For that you have pizzerias and espresso bars everywhere (of variable quality), but for our money, wine bars are the way to go if you want a simple snack or plate of pasta without a lot of fuss after dark. The bonus is, of course, they also have incredible wine selections, some real bargains by the glass (or carafe), and no one frowns at you if you just want a small plate of some incredible artichoke ravioli with a Gravner Breg like we had L’Angolo Divino. The other bonus is these spots are all within a short walk of each other in the Centro Storico

Il Goccetto (pictured above) – Very popular with the young crowd. Doubles as a wine store. Nice antipasti display counter as you enter. Go early or late and go with a thirst.

Cul de Sac – An old favorite off the Piazza Navona. Friendly welcome. Outdoor seating.  Rome’s first proper wine bar (since 1977) is still one one the best, with food a lot better than you expect it to be.

L’Angolo Divino – A cozy spot right off the Camp de’ Fiori, the modest entrance gives you not a clue as to the beauty of the food and the wine selection. An incredible list with a very helpful staff. 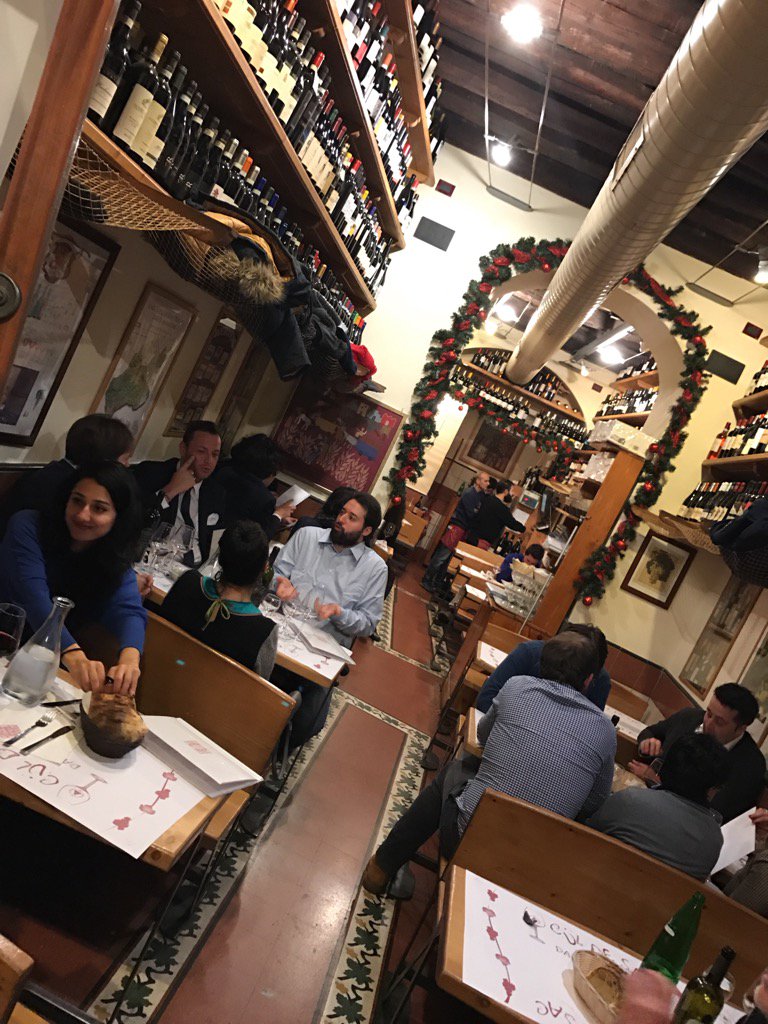