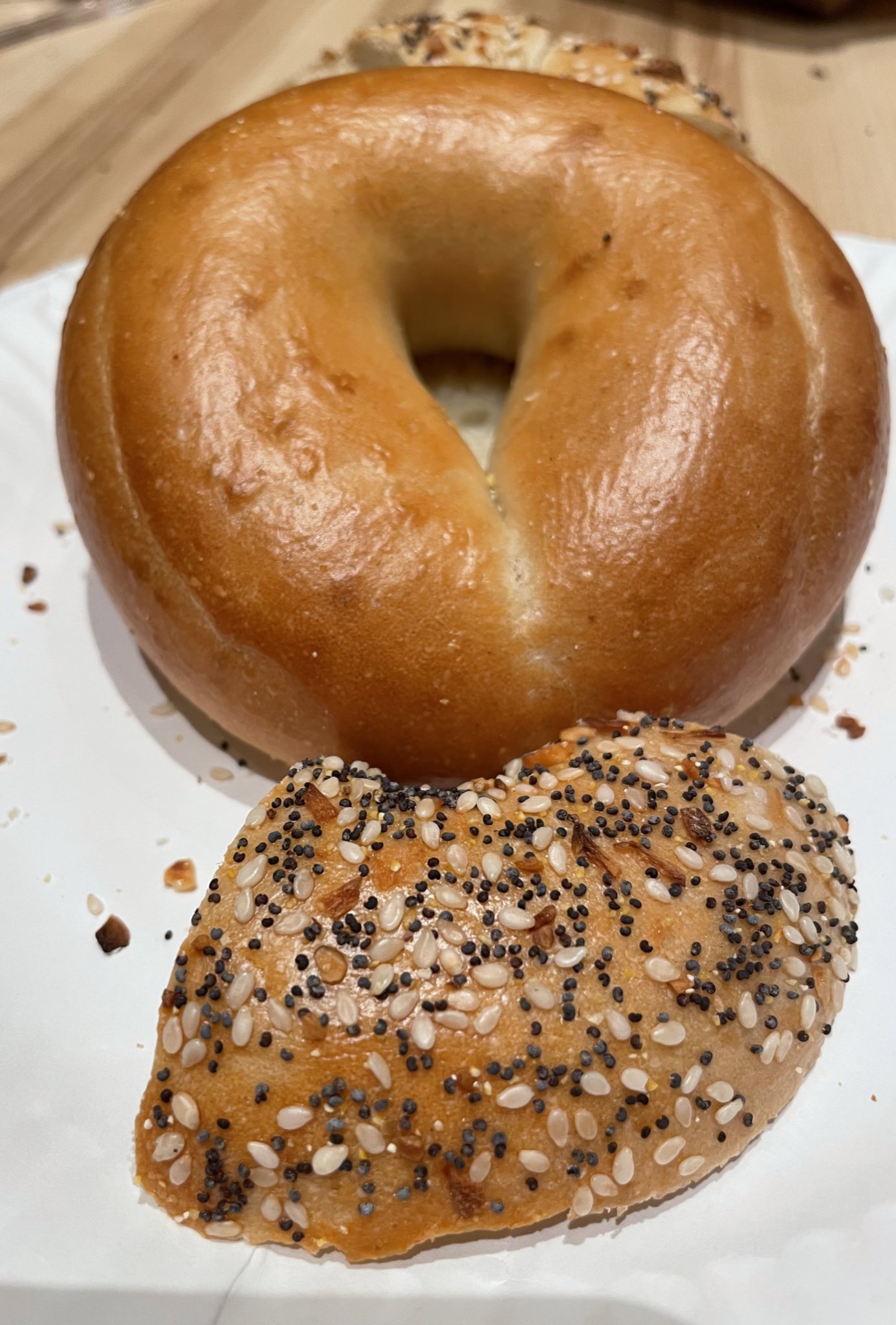 When you think about it: a bagel taste-off makes perfect sense. Unlike burgers, pizzas or cupcakes, there aren’t hundreds of competitors in the field. The ingredients of a bagel are simple; opinions of quality are ubiquitous, and various anecdotage of its etymology are everywhere.

What we do know about bagels is that you can’t avoid them these days, and Jew and gentile alike claim them as one of America’s favorite forms of bread. (People have been spending more $$$ on bagels than doughnuts since the early 1990s.)

Without boring you with a lot of history, we will recommend this overview of bagels beginnings, and state for the record that they have a lot more in common with the German soft pretzel than anyone wants to admit.

And as long as we’re being frank, as a batter of fact, yours truly is more a fan of the un-boiled bialy than bagels. But I digress. 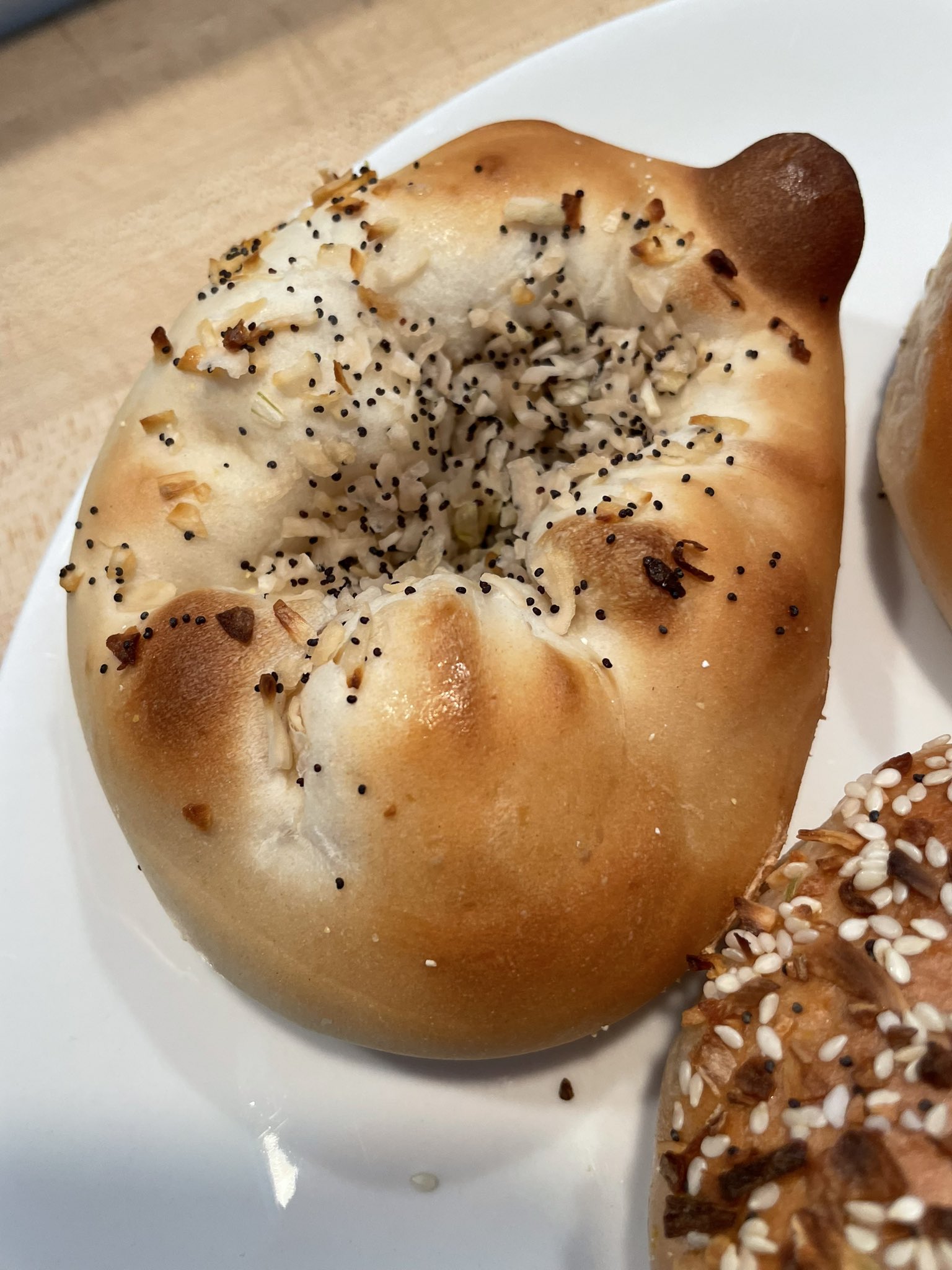 (Max Bialystock would be proud)

Bialy that as it may, we knead to boil things down for you at #BeingJohnCurtas — turn up the heat, and bake things right so as not to leave a flour taste in your mouth.

Once you’ve finished this article, the yeast you can do is bread the word around and crust our findings into the limelight. This is serious stuff folks, and this competition could result in a legend in the baking. Or something like that.

Las Vegas seems to be going through a bagel resurgence these days, with new ones poppyseeding up all over town, bready to announce that all others are toast.  It’s a crowded field (a flock of bagels, if you will will), but not so crowded that we couldn’t slice the contestants down to eight, and weed out the crumbs. 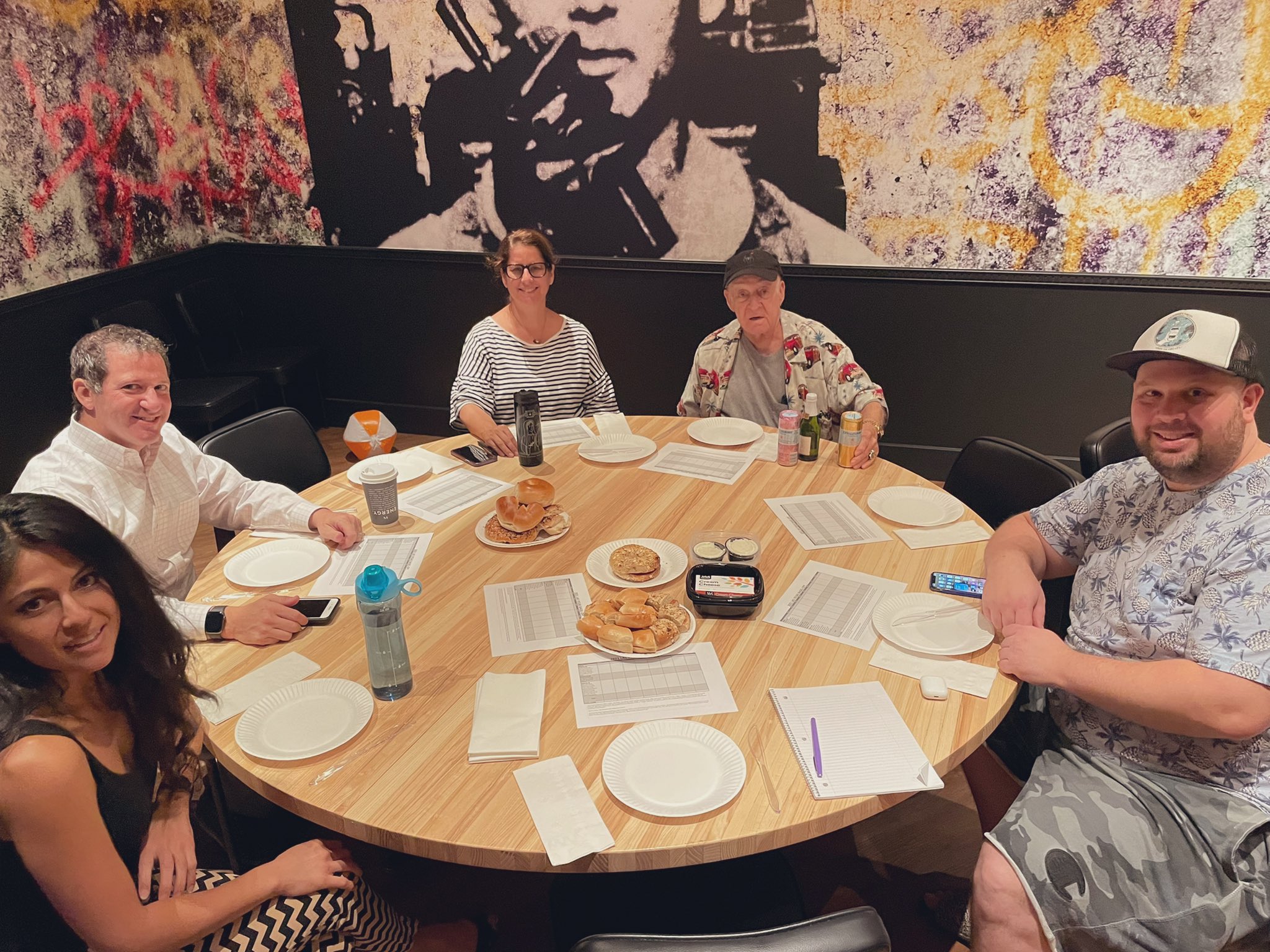 Picking the judges was harder than choosing the finalists. We wanted a nice cultural cross-section of bagel aficionados — which is coded language for “mainly Jews.”

This was for two reasons: 1) because other Jews will scream “FOUL!!!’  if an insufficient number of the tribe are there to represent….and I forgot what the other reason was.

So the judges broke down as follows:

…and once they were in their places, all took the sacred Hebrew oath: “Are you ready, willing, and bagel?”

And off to tasting we were. 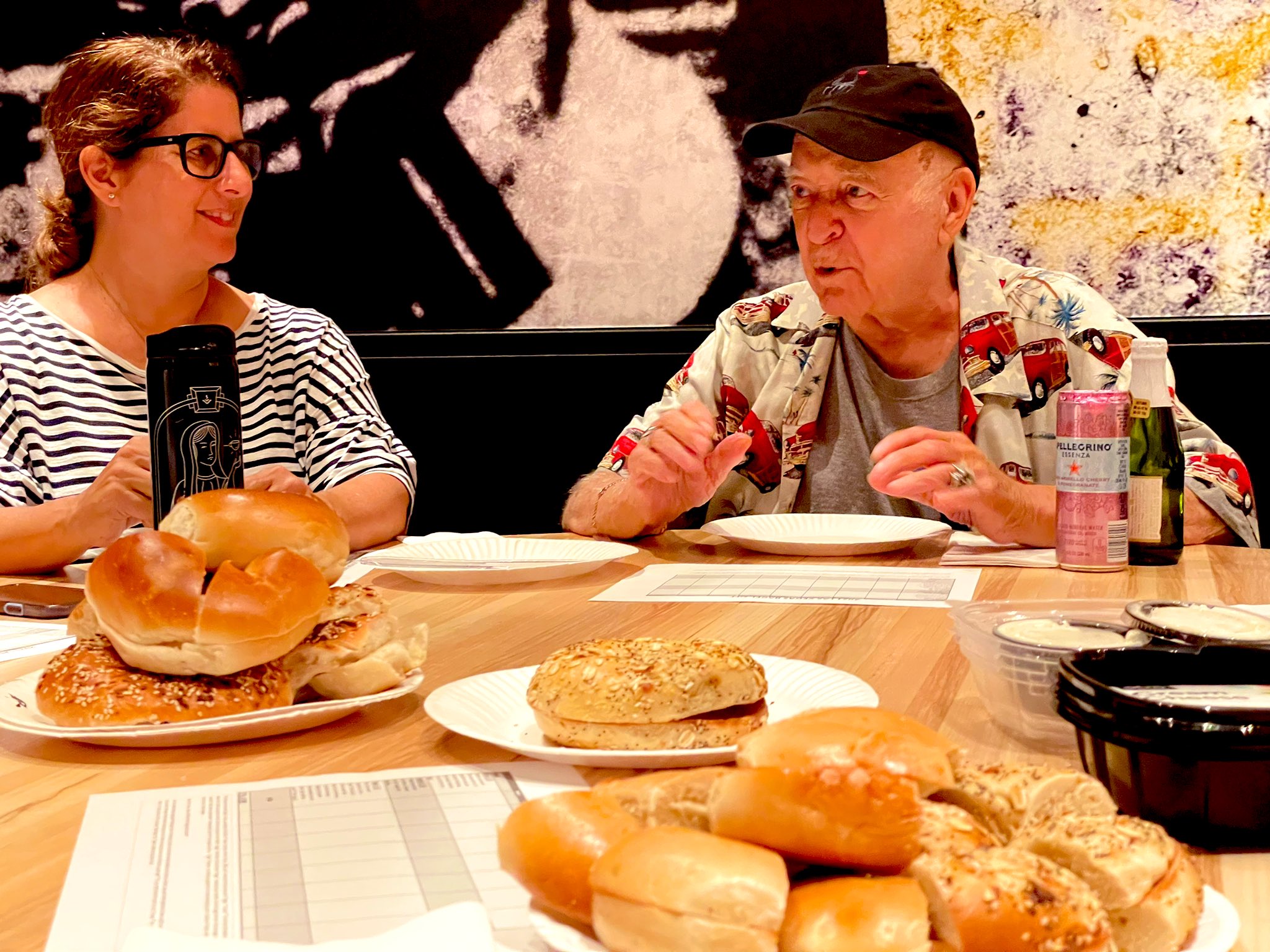 With all the pseudo-scientific precision we could muster, our bagel hounds proceeded to break their bread with alacrity. Debates were heated, temperatures rose, and more than one got cheesed off. But in the end, flour power determined the rules:

Crust (1-5) – A good crust should have some kick to it; it should be crusty but not hard. Presenting just enough resistance as you bite into your bagel

Interior/Chew (1-5) – A bagel should never be rubbery; it should be soft, doughy, and delicious.

Taste (1-5) – This is the overall experience. Is it too salty? (That is bad.) Is it too sweet? (Also bad.) Are all the flavors in perfect harmony, aligning the planets and exposing to you all that’s right with the world? (That is good.)

“And just what makes a bagel good? Bread guru Mark Furstenberg, founder of local foodie temples Breadline and Marvelous Market, says well-made bagels should have a slightly sweet exterior from the malt syrup used in the water they’re boiled in and heavy but soft insides. How do you know you’re biting into a great bagel? “First, your teeth break the crust,” he says. “Then you get to a pliable, doughy interior. It’s that contrast that’s so pleasing.”

With these in mind, we dove in.

First we said “gluten morgen” to each other — well before noon so everything was as fresh as possible.

Methodology was agreed upon relatively easily (especially for a bunch of Jews). Rather than split Talmudic hairs over fine points, we settled on a simple formula: 1-5 ranking  in three categories: crust, chew (interior), and taste. The max points any bagel could get was 15. (No bagel came close to getting a 15. Only one, the winner, scored a 13, from me.) Every judge gave each bakery a final score, and then all the scores were added together for a final tally.

Although two different bagels were sampled from each bakery (a plain and an “everything” bagel), the impressions of both were combined into one score. So, for an example, each judge tasted the crust of both (different) bagels from the same bakery but gave only one score for the “crust” category — for how well it does the crust on two different bagels. (Go ahead, start splitting those Talmudic hairs.)

Judging was blind (only after all the scores were in did we know flip the plates over to reveal the names), but there were active discussions during the judging, comparing sensations if not scores.

It was actually quite remarkable how much we agreed on so many of the entries. 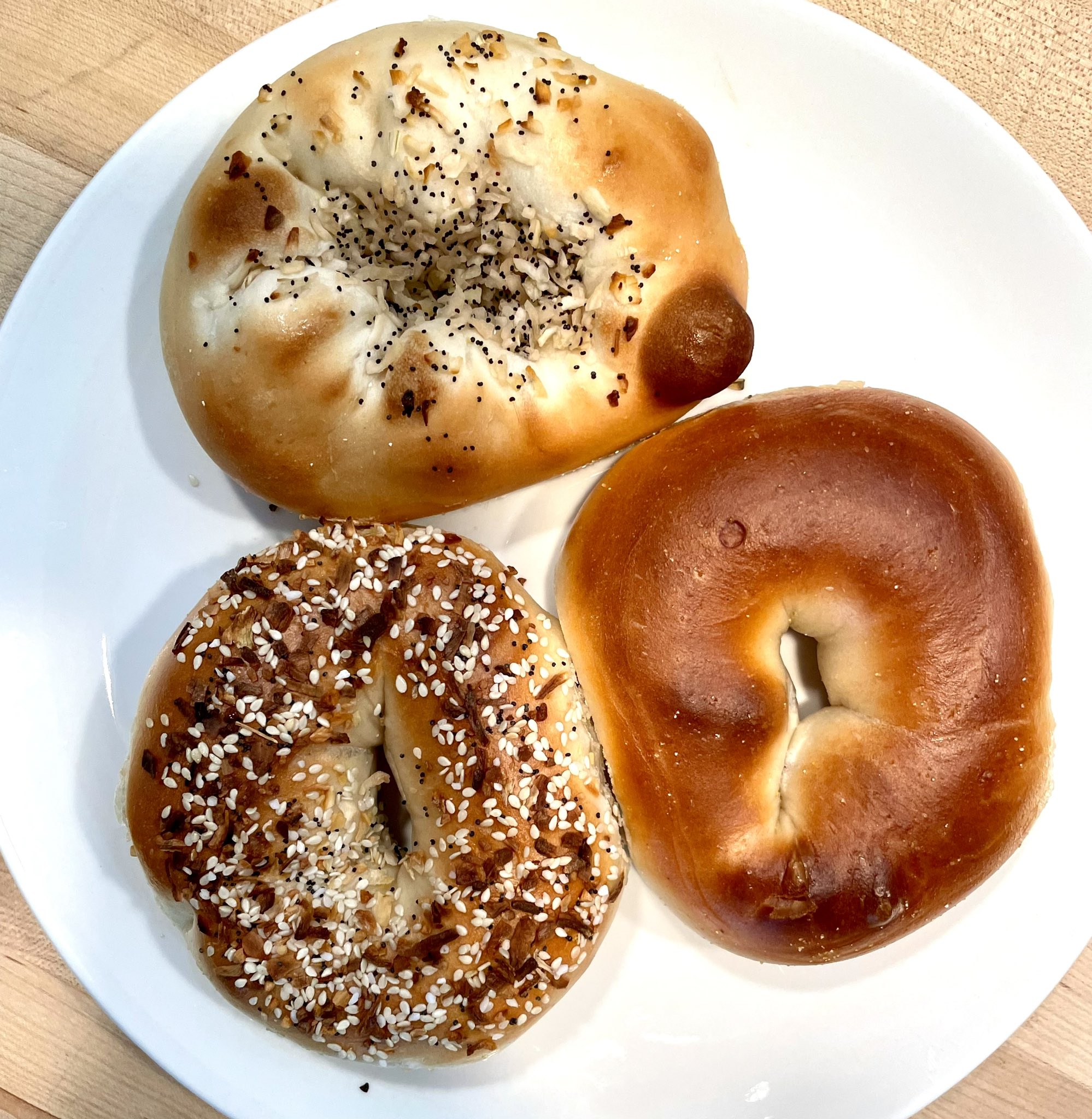 Crust, bite and texture were key. Soft and bready didn’t cut it. Blandness was the bugaboo of the lower rated bagels, while a strong, fresh-baked, sweet/wheat/yeast quality (sometimes slightly salty – New York Bagel, sometimes with a touch of tang – Life’s A Bagel), tipping the scales greatly in the winners’ favor.

Some of the bagels didn’t even look the part, and resembled a doughnut that had lost its way. A couple were so pale they could’ve decorated a Mormon wedding cake. The worst sported the texture of cheap white bread.

Judging Comment of the Day (describing Bagelmania’s “everything” bagel): “This is the Backstreet Boyz of bagels…nothing is In Synch.” (Thank you, Lou.) 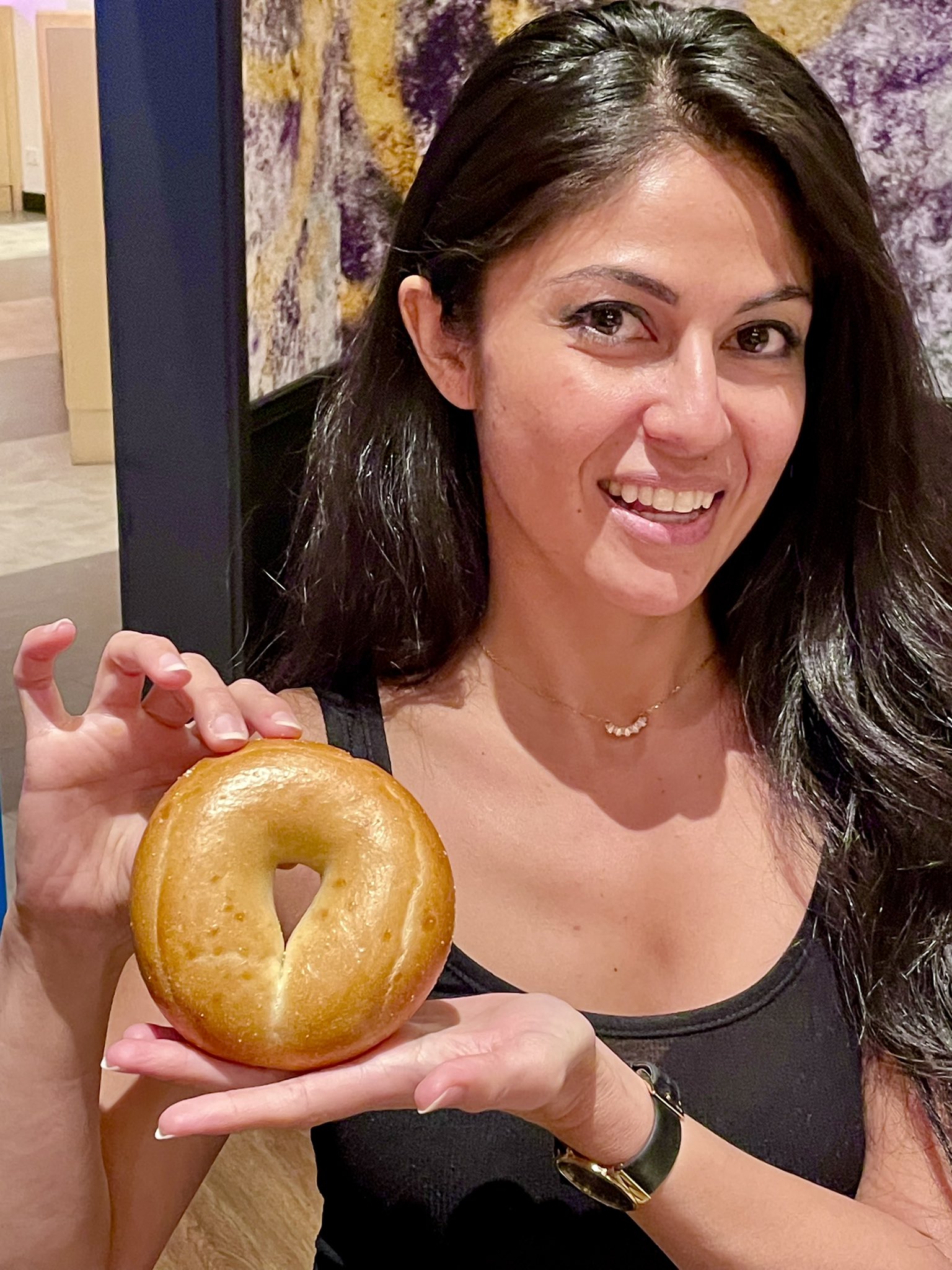 The clear winner, scoring 10 points higher than second place. Beautiful crust, salty-sweet, just the right chew, it was the top-rated bagel of 5 of the 6 judges. 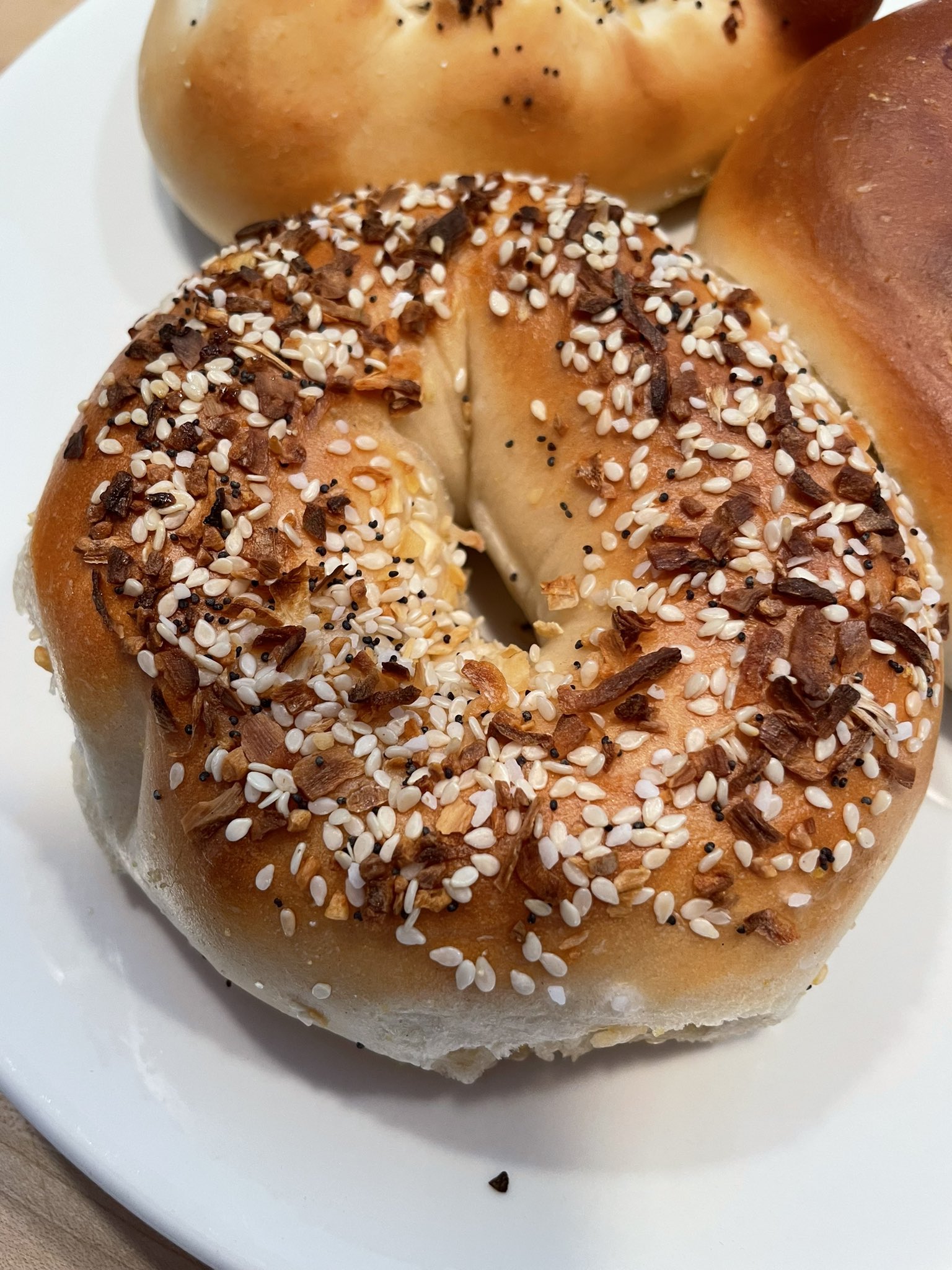 (You are my everything)

My pre-tournament favorite was less dense than the winner (but not by much), with a slightly softer crust and a slightly sweeter finish. It edged out….

Both worthy in their own right, but lighter, and lacking the substantial doughy/chewiness, distinctive exterior, and overall punch that separated the top two from the pack. 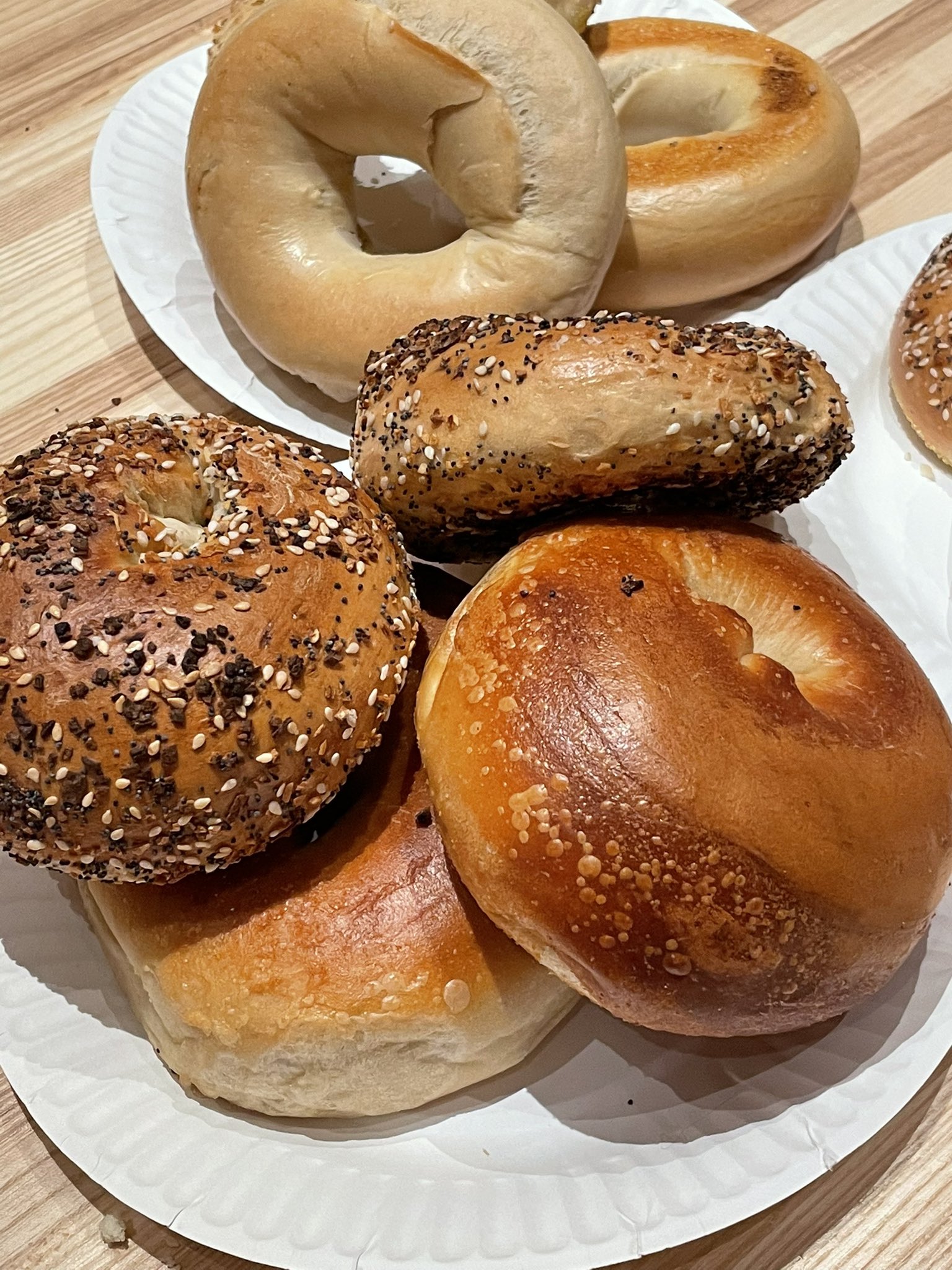 To be fair, these two were close to Bodega and Weiss in scoring, but were miles behind the top two. We ignored price-to-value ratio, but if you’re factoring that in, Bagelmania (at almost 2 bucks a pop) would be dead last.

To give you an idea of how lame these were, Life’s A Bagel scored 69 total points, and New York Bagel 59. The next two tied at 56. Einstein’s (33 points) edged out Bagel Cafe by a point.

Quibble if you will, but when you do side-by-side comparisons like this, lots of pre-conceived opinions crumble, and quality shines through. People are full of opinions, but nothing hones the palate better than comparative tastings — whether it’s bagels or Burgundy.

And if you don’t like our results, do your own tasting!

Just be sure to have plenty of Jewish friends.  ;-)

Many, many thanks to Lou Hirsch for doing all the heavy bagel lifting.

Congratulations to Life’s A Bagel! We’ll be seeing you for a nosh soon.