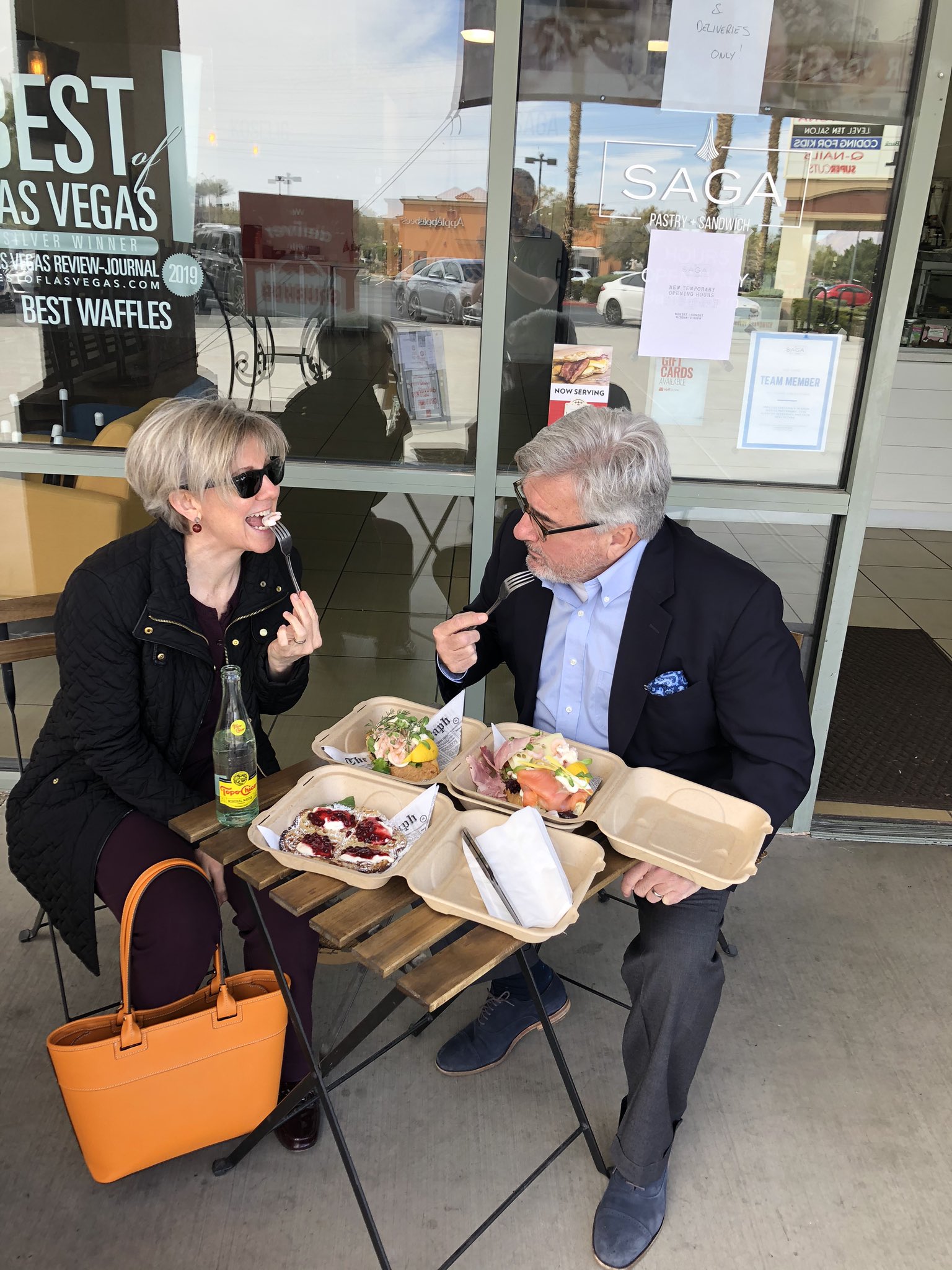 (The Curbside Curmudgeon is not amused)

The week just past was a slog and a blur at the same time. It started (on Sunday) with abject despair. And ended with a glimmer of hope.

He went to work today. He’s gone to work every day. Even with the generous leave being offered by the City (his employer) he’s going to go to work.

Work gives him something to do. It breaks the monotony of the day. Even if he does little but catch up on e-mails, it is time well spent. In the past seven work days his phone has rung exactly twice. Court appearances are now being done telephonically. Depositions are all being cancelled or pushed way back; deadlines are being extended left and right. Business has ground to a halt.

This will have far-reaching effects on the body politic, he thinks, and the fools have no idea what they’re doing to themselves.

He interacts with people at work the way he always has. They all think the shutdown is horseshit too, but no one can say it out-loud for fear of being shouted down by the (now galvanized) health mob.

He finds himself calling it the “lamestream media” as the torrent of overblown cases and melodramatic reporting washes over him every morning.

Sensible voices have been drowned out.

Sanity is always quieter than panic.

His neighbor offers some Spanish Iberico ham as a salve for boredom. He delivers it by coming in through the front door and running away after he drops it on the counter.

“C’mon in and have a drink!” (They are twenty feet away at the dining room table.)

“No way, man..social distancing,” he calls out over his shoulder as he exits at a pace slightly slower than being chased by someone with a knife.

This is a young, smart guy who’s now acting like a fool. Such is what a herd mentality does to people.

The Food Gal® helps make some incendiary salsa. They eat it with chips and slivers of nutty, intense, mahogany-colored ham. This is their dinner. Neither of them has much of an appetite. 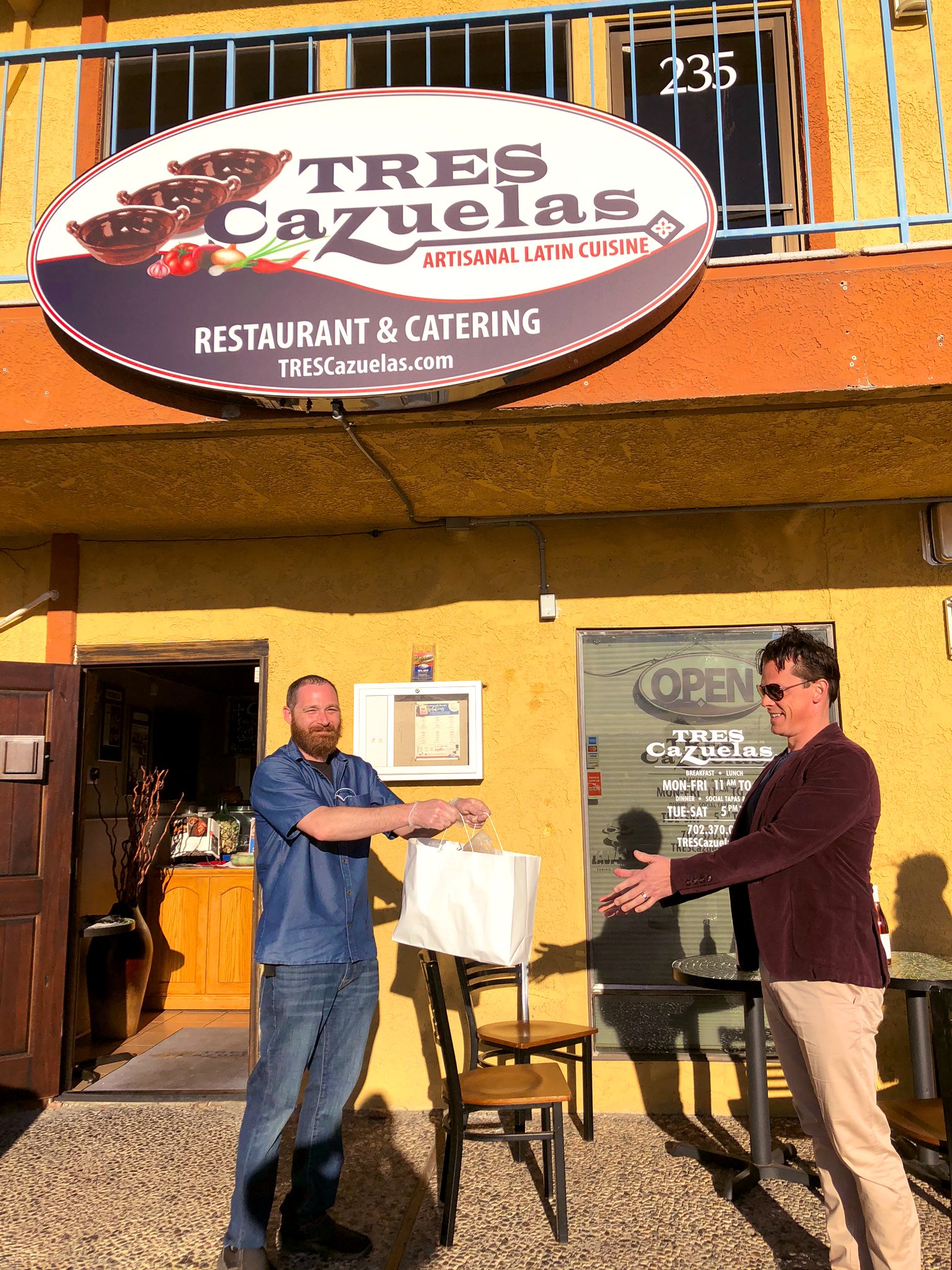 They want the fear to be immediate, even when everything about it seems so remote. There is so much discordant information. Just this morning a doctor tells everyone soothingly that “80% of people will recover with only mild symptoms.” Five minutes later there’s another talking head stating the virus has “overwhelmed” America. At this point it isn’t clear whether guy #2 is talking about actual infection, or the (self-imposed) destruction of the American economy.

If you watch the day-by-day national news, all they do is run a scoreboard of who has the virus and how many have died. Into this limited mix they toss in commentators talking about how the illness will soon be “sweeping the nation” — conveniently ignoring that 99.9% of Americans have been untouched by it. (The math is as follows: 133,000 cases divided by 330,000,000 million Americans equals  .04% of the American population – the number of folks documented as having had the illness. For you math retards, that’s 4 one-hundredths of 1%.)

To keep the math going, the number of dead from the virus as of this writing numbers approximately 2,400 people. Dividing that number by the total population gives you a death % of .0007% of Americans have died from the infection. (That is 7 ten-thousandth of 1% for you numbers-challenged folks.) For the last time: These are a far cry from the numbers used to start this slow-rolling horror show.

Remember 60% infected/3% dead? Conveniently for the gloom-and-doomers, no one else does either. They just want to keep the scoreboard going… as the press would rather stoke the flames than keep anything in perspective.

The whole thing reminds one of weather panic — the constant drumbeat of impending doom pounded day and night to keep you tuned in. The only difference is: when the hurricane or snow doesn’t show (or isn’t cataclysmic), everyone shrugs and moves on. The shrugging and the moving on won’t be so easy this time. As long as New York City remains our media capital, there will be no “fair and balanced” reporting of this disaster. He knows he’s beating this to death, but so is the media, so his critics can go fuck themselves.

The weather is cold and windy. Undeterred, they set out to Trés Cazuelas to show support for Angelo Reyes and his crew as they fight to stay alive.

He has a new moniker: Curbside Curmudgeon. It fits his mood. The cold breeze fights their dining al fresco scenario, but they persevere.

Reyes’ stews and salsas are next-level, and go great in small, fresh tortillas, even cold ones. Eating them outside is a race against the wind, but the chilly weather keeps the wine at the right temp, so there’s a silver lining in everything. This is also the best guacamole in Las Vegas, so the comfort food makes up for the cold: 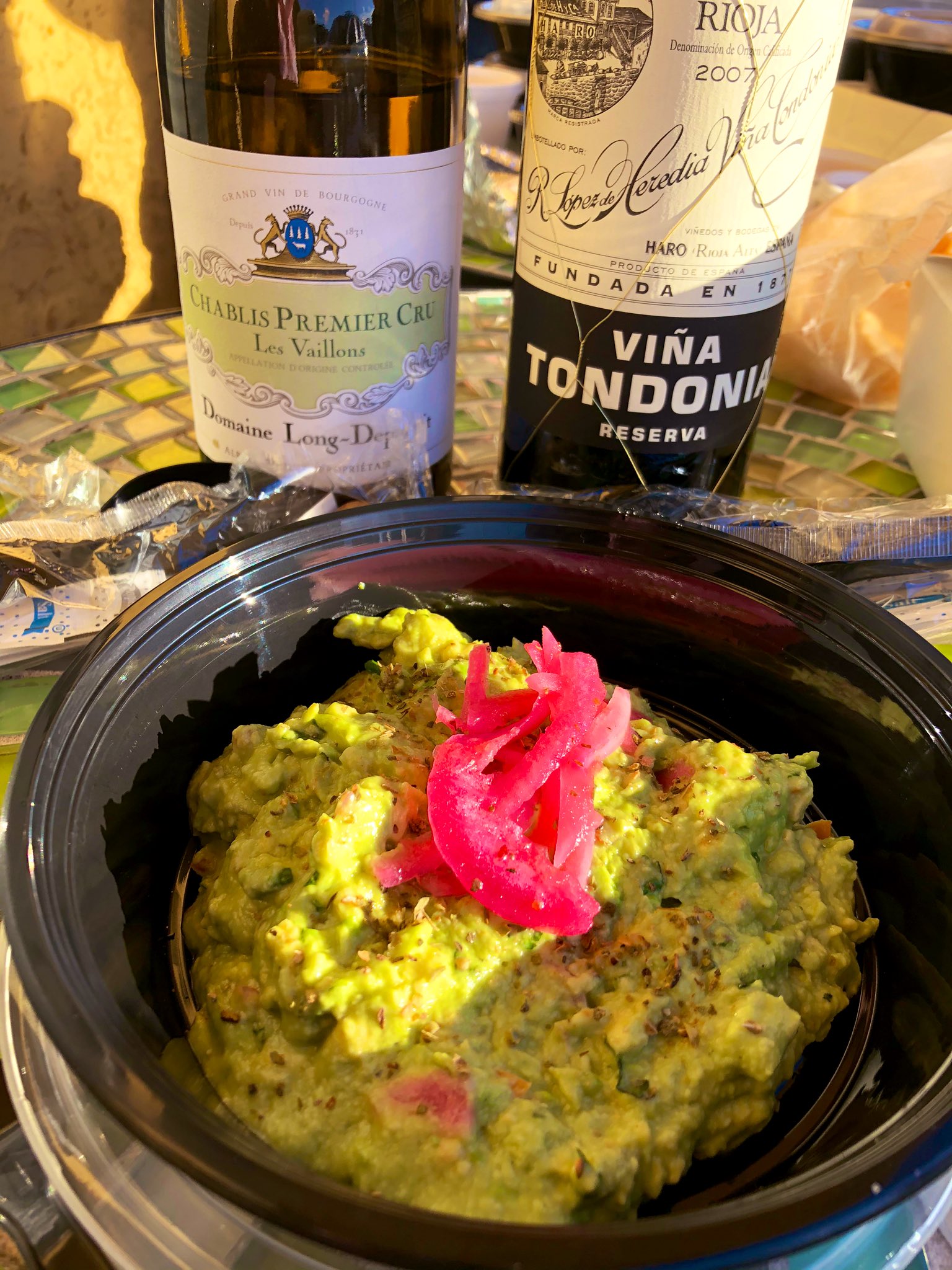 His oldest sister posts this meme that’s going around:

How true, but being stir-crazy isn’t the worst of this. The truly insidious thing is how any fear — stoked into a panic by government and media–  can empower people to police each other. “Police each other” meaning, in this context,  turning into the lowest, sniveling, holier-than-thou asshole — the type who gets great joy in telling the teacher on fellow students, turning someone into the HOA, or betraying a Jewish family to the Nazis.

Give ’em an inch and they’ll take a mile. Tell humans they have a right to tell others how to behave and a small-but-significant portion of them will take it upon themselves to act as judge, jury, and executioner to anyone they disagree with.

Marché Bacchus — which, you may recall, was the site of some wine buying last week — gets narc’d on by some do-gooder. “People were inside Marche Bacchus buying wine and sitting down!” she screamed to business licensing officials.  “Something must be done!”

Dutifully, the government officials appear to investigate; feathers are ruffled, but assurances given and the whole thing passes. Meanwhile, people are packing into Walmart, Costco, drug stores and supermarkets and no one says a thing. Government policy in action.

Later in the day, the City of Las Vegas, in a show of sanity,  announces liquor and wine stores can continue to sell their wares curbside.

The Gubenator’s office remains silent — apparently content with the thousands of strangers milling about supermarkets all over town. 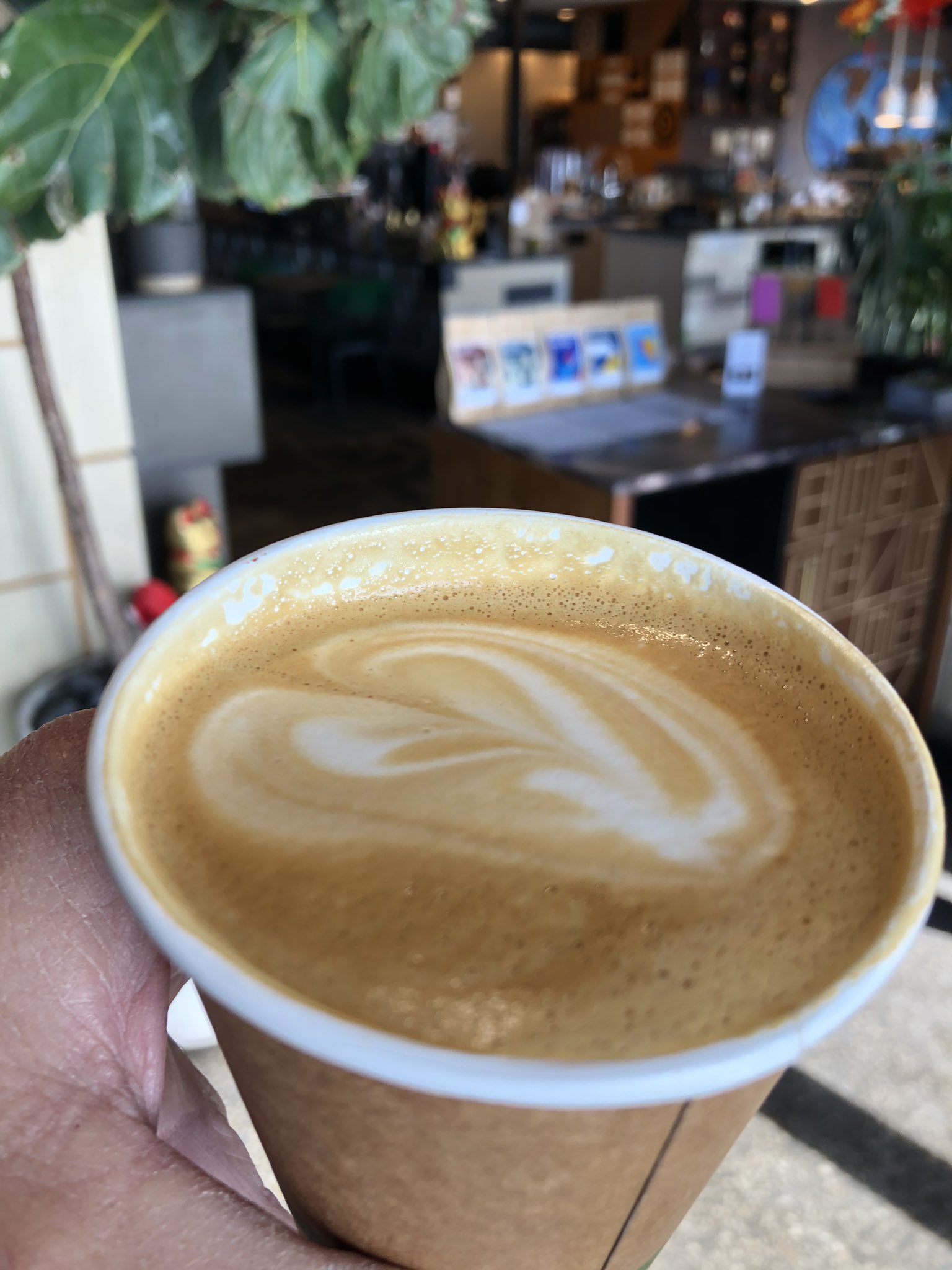 (Coming up – one lonely cappuccino)

The day starts with a lonely cappuccino at PublicUs – sold at a take-out booth inside the front door. A young bloke takes your money turns around and makes the coffee. It is a splendid cappuccino, perhaps the best in town. There are two tiny tables left out front where it can be sipped and contemplated. These would no doubt greatly offend the Covid Gestapo.

The coffee costs, $4; he gives the kid a double sawbuck and tells him to keep it. 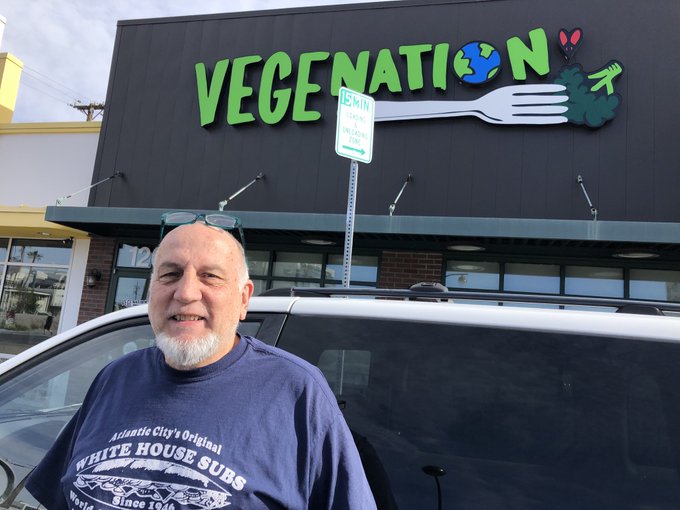 On the way back from coffee, he bumps into chef Donald Lemperle at VegeNation. Like many small operators, ⁦@VegeNation is keeping its doors open by having a single chef do all the work. Vegans are a loyal bunch,”  Lemperle tells him, “and they’re keeping me busy.” This brings a smile to both their faces.

The Food Gal® picks him up and they head to the far confines of Eastern Boulevard in Henderson for lunch. There is only one restaurant (indeed only one thing) that can get him to this whole, godforsaken area of the world: Saga Pastry + Sandwich. Of course we bring our own table and chairs (see pic at top of page)….and then we chow down on superb, sweet Arctic shrimp (tasting like a combination of crab and lobster) and a smorgasbord sando to beat the band. 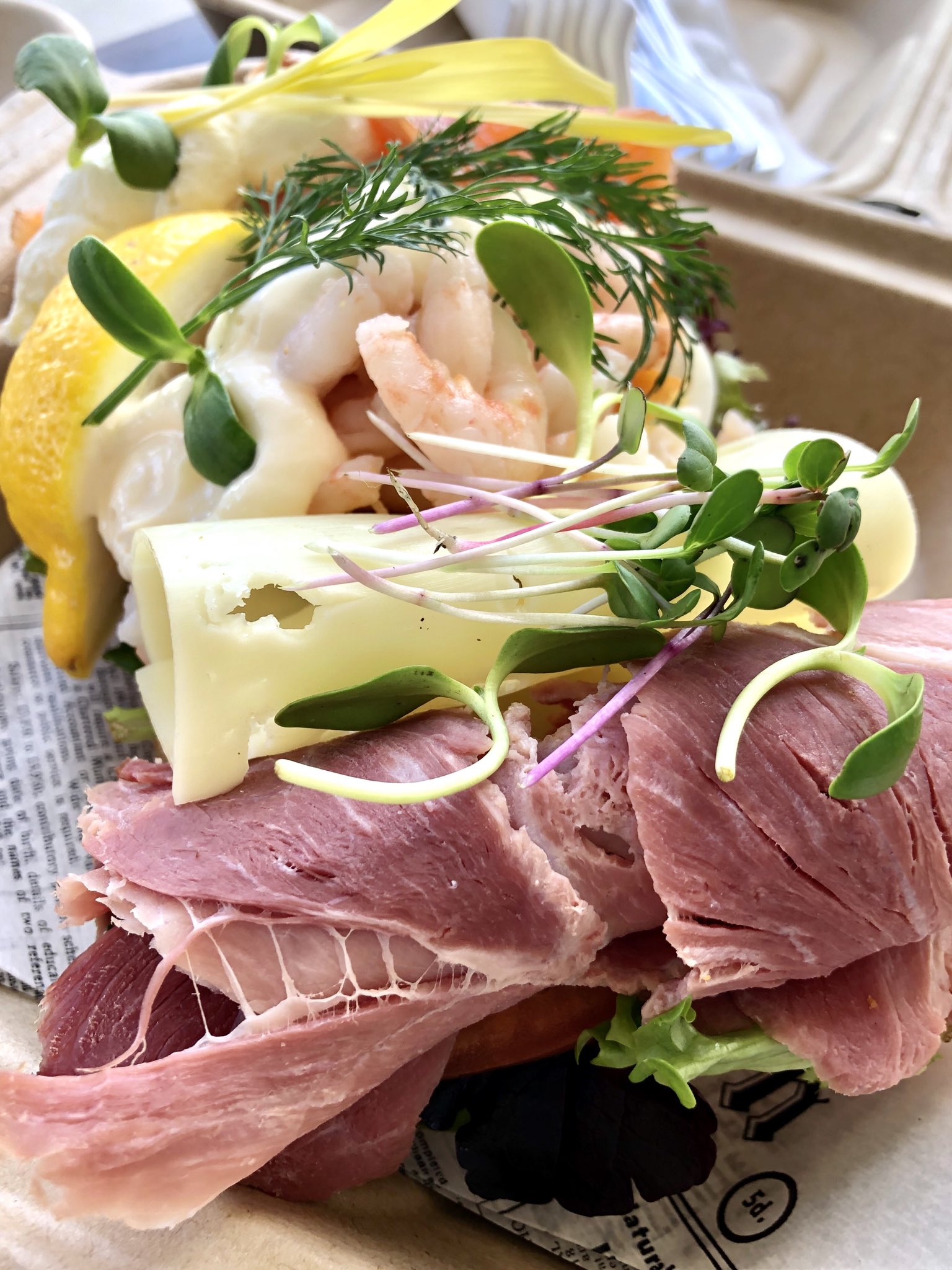 They even squeeze in a little chat time with chef/owner Gert Kvalsund. This improves everyone’s mood, as does another cup of joe from Bad Owl in the same shopping center. When this is all over, he hopes people will more readily appreciate how much good sandwiches and cups of coffee can do to improve your mood.

But his biggest fear is just the opposite: that the only survivors of this self-inflicted apocalypse will be standardized food and corporate restaurants.

2 thoughts on “The Covid Diaries – Vol. 4 – Eating Out While Rome Burns”