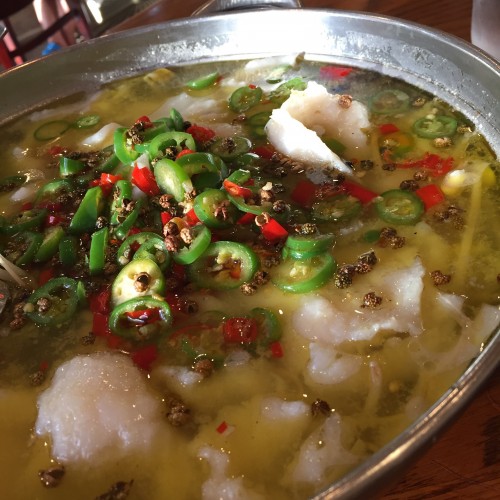 Besides being a fun read about the birth of a food writer, Fuschia Dunlop’s Shark’s Fin and Sichuan Pepper: A Sweet-Sour Memoir of Eating in China is a great primer on the glories of Szechuan cooking.

An unabashed fan of the Szechuan province (she considers it the ne plus ultra of Chinese cuisine) her book explores everything from the tongue-numbing effect of those mysterious peppercorns, to the Chinese propensity to eat “everything that flies except an airplane, and everything with four legs except the table.”

Much as Julia Child did with French food in the 1960s, Dunlop became an English language emissary for Chinese cuisine by first taking a professional chef’s training course at a Chinese-only institute. From there it was on to cookbook writing, and to what is now a lifelong quest to make the food of this southwestern province more accessible (and understood) by her British and American audiences. Her recipes pull no punches (Turtles feet and rabbit’s head anyone? Anyone?), but her unabashed enthusiasm for this cooking is infectious, as is her love for the pungent-spiciness of Szechuan food, and its range of flavors that no other area of China can match. And you can pretty much credit her writing for the increased interest in Szechuan food by gweilos and gringos on both sides of the Atlantic pond.

About the only thing Dunlop and I disagree on is the spelling of Szechuan: she preferring the phonetic spelling (Sichuan) and I spell it any old way the restaurant does.

Another thing we probably wouldn’t disagree upon is that Chengdu Taste — our offshoot  of the heavy hitter Alhambra original –is the best Szechuan cooking you can find this far east of the Far East.

Along with J&J Szechuan and Szechuan Express, Chengdu (which opened here about a year ago) forms sort of a holy trinity of tongue-numbing, electric eating. I say “electric eating” because the net effect of eating highly-spiced Szechuan cooking is to feel like small jolts of electrons have been activated in your mouth and body.

Each of our Chinese triumvirate achieves this bliss, and each has its charms — J&J is more Chongqing (chile-oil forward) in style, while Szechuan Express is the most gingo-friendly —  but CT pretty much sits as a first among equals. (A fourth entry into these proceedings — Lao Sze Chuan in the Palms Hotel —  closed recently after a short run which found it trying to go upscale with this food. Never a good idea.)

Upscale or not, the beauty of this fare is that those chilies always seem to enhance the flavor of the proteins, not overwhelm them. For instance, in a properly made dan dan mian (like these):

…the chewy, toothsome noodles have a flavor of their own that comes through, as does the ground pork sauce lying in the bottom of the bowl. You appreciate the individual ingredients even as the whole is exceeding the sum of its parts. All while your eyeballs are sweating and you can’t feel your lips. No mean feat that.

Just as revelatory is this “Diced Rabbit With Younger Sister’s Secret Recipe”:

…that is as bony as it is cold and coated with an ethereal, fermented heat. It is not a dish for everyone (those bones will drive you batty), but a real litmus test for budding gourmands who want to see what all the Sichuan shouting is about.

Our staff generally avoids hot pots, even if the Chinese families seem to love them (because we at ELV think everything ends up tasting the same),  but went nuts over the boiled fish in green sauce at the top of the page. For twenty bucks you can get fresh fish (most likely tile fish or tilapia), but when it’s not available, the frozen stuff (for four dollars less) is almost as good if a bit mushier. That bowl will easily feed 4 adults and boasts chilies from across the spectrum of heat.  Those ubiquitous peppercorns wrap around your tongue, but somehow set off, rather than obliterate, the taste and texture of the fish and other spices. In this case both fresh Serranos and dried Tien-Tsin reds marry with their piney scent to make for one memorable fish dish.

Put it all together and you have our best Szechuan restaurant. A restaurant that, by the way, that gets very crowded very early. (There’s only about sixty seats in the joint.) Almost from the day it opened, the Chinese cognoscenti descended on this place (most of them, no doubt, from SoCal), making a table on weekends or peak dinner hours almost impossible to get unless you want to stand in line. (On the bright side, table turnover is fairly fast and service is almost preternaturally quick.) Our advice: get there before noon, or pick a weeknight and get there around 5:00 and you’ll have no problems. The staff is bi-lingual and helpful and the menu is full of pretty pictures and easy to navigate.

In other words, there’s no reason to delay your Sichuan (or Szechuan) education any longer.

Lunch or dinner for two, with enough food for four, should run you around $50.