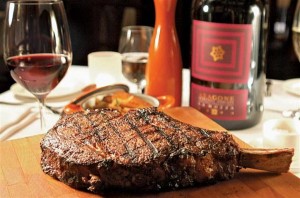 Its sirloins, porterhouses, and rib eyes have caught the attention of Black Angus aficionados the world over, and meat lovers now flock here to get them. There may be a certain civic pride behind my calling Carnevino the greatest steakhouse in America, but I’ll stack the following arguments up against any emporium of prime anywhere. First, there’s the meat: all-natural, hormone-free, and hand-selected by Adam Perry Lang—a professional “meat forager” and a man who Rachael Ray (along with many others) has credited with raising the industry standard for the beef we eat.

In addition, all steaks are dry-aged in Las Vegas by the restaurant itself—not by some middleman—in a climate-controlled, 2,000-square-foot meat locker. This process achieves otherworldly tenderness and taste after two to eight months—the prime amount of time for these beauties and “riserva” cuts to reach their peak, according to Chef de Cuisine Nicole Brisson.

Finally, no other steakhouse in America has such a hands-on, intensive-care selection-and-aging process, and no other purveyor of prime can stake a claim to also being one the great Italian restaurants anywhere.

Thus does this kitchen also dazzle with everything from house-cured salumi, such as coppa, lardo, and lonza, as well as a variety of pastas as diverse as ricotta and egg ravioli, to a black fettucine with crab, jalapeños, and shallots. Put these together with the purest Pennsylvania free-range veal from Marshal Farms, as well as Heritage Foods pork, and you have a steakhouse of uncommon sophistication. The wine list is just as impressive as the steaks are … and just as expensive.

Purists might kvetch that grilling a slab of animal muscle or prepping pasta with pancetta and pecorino doesn’t require the same precision as the pristine preparations purveyed at Twist or Raku, but for all of them we have but two words: Shut the f*ck up.

Max Jacobson: “Initially I thought to exclude Carnevino, but I came to my senses. I don’t agree with John about the ultra-aged beef, but Adam Perry Lang is a fabulous butcher, and the chef here does make the best salumi this side of Bologna.”