Ah, the dulcet tones, the violin solo, the sweet as hell music video of some Utopian jazz club.  I was very excited to see the new joint in the MGM (taking over the Nob Hill spot) is named after my favorite song from one of my favorite bands, Dave Matthews Band (I call them DMB).  “Crush” is a totally great song with good music in it, but will this tapas/wine bar be worth the square footage?

It’s a venture of Michael and Jenna Morton (of La Cave, La Comida, and the Morton Steakhouse Group [but only via familiar relation, not business]), but an interesting one.  The space itself is unusually cozy.  I was thinking it would be all bistro seats and techno music.  Yes friends, I am glad to tell you there is a semi-casual restaurant that isn’t pumping out Teen Disney or geriatric-core rock, but rather simple and soft jazz piano covers.

The interior here is cool, but cool in that way where you make a normal space and put a ton of vintage laboratory equipment in it to make it “hip”.  Like all darkened tapas/wine bars, it has already started to attract every lady over 30, probably by way of some kind of pheromone or emitting an extremely low frequency.

The menu, in a very uncharacteristic move for such concepts, is actually NOT a giant unfocused mess!  Twenty-three items are tapas (seven of which are pizzas, just thin enough to skirt the entree category), eight are “full-size” dishes.  More on the suspicious quotations around that term later in the article.

Some items, like the hamachi or the kale salad, are a bit phoned-in or could have benefited from some simple tweaks or additions.  These sour notes only punctuate an otherwise very unique menu.  The executive chef, William DeMarco, has taken the next logical step from his La Cave style with pizzas that leave his own flat breads in the dust.  The Thai coconut curry shrimp pizza, with asparagus and smoked bacon, is complexly spiced and surprisingly creative. 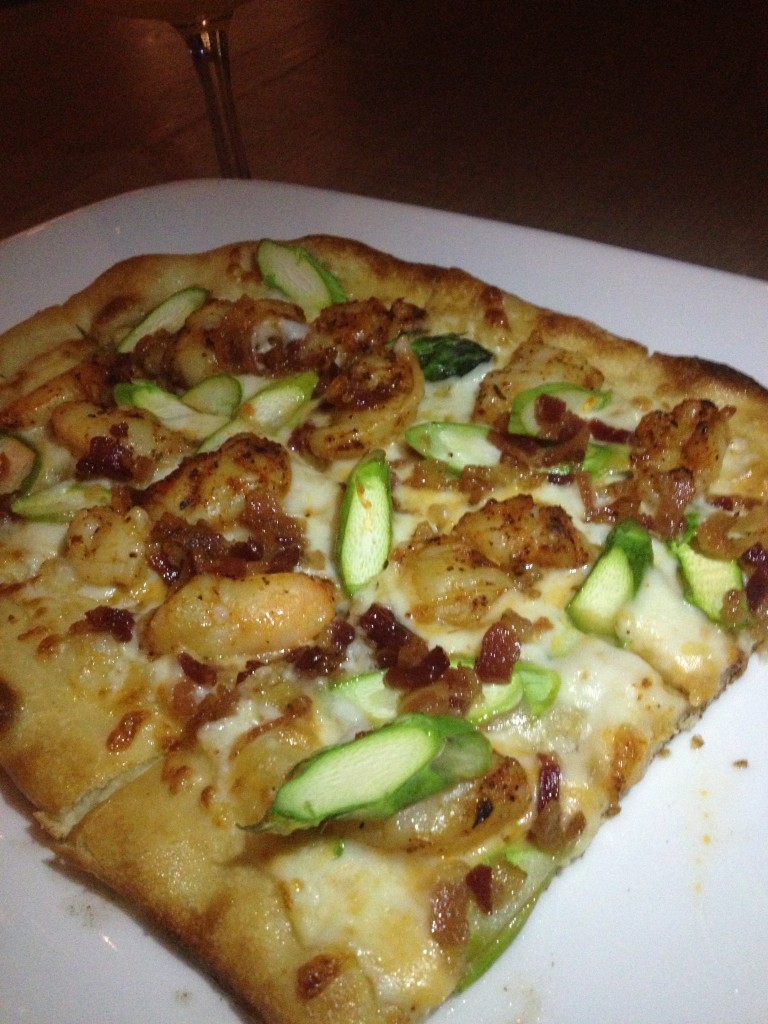 Or take for example, their scallop “Benny”.   A fat, buttery scallop, topped with a quail egg, perched atop a spicy dry chorizo and a potato cake.  It’s a solid, round palate of flavors, and the chipotle hollandaise is as good as one could expect outside of breakfast hours, but may have erred a bit too close to an aioli. 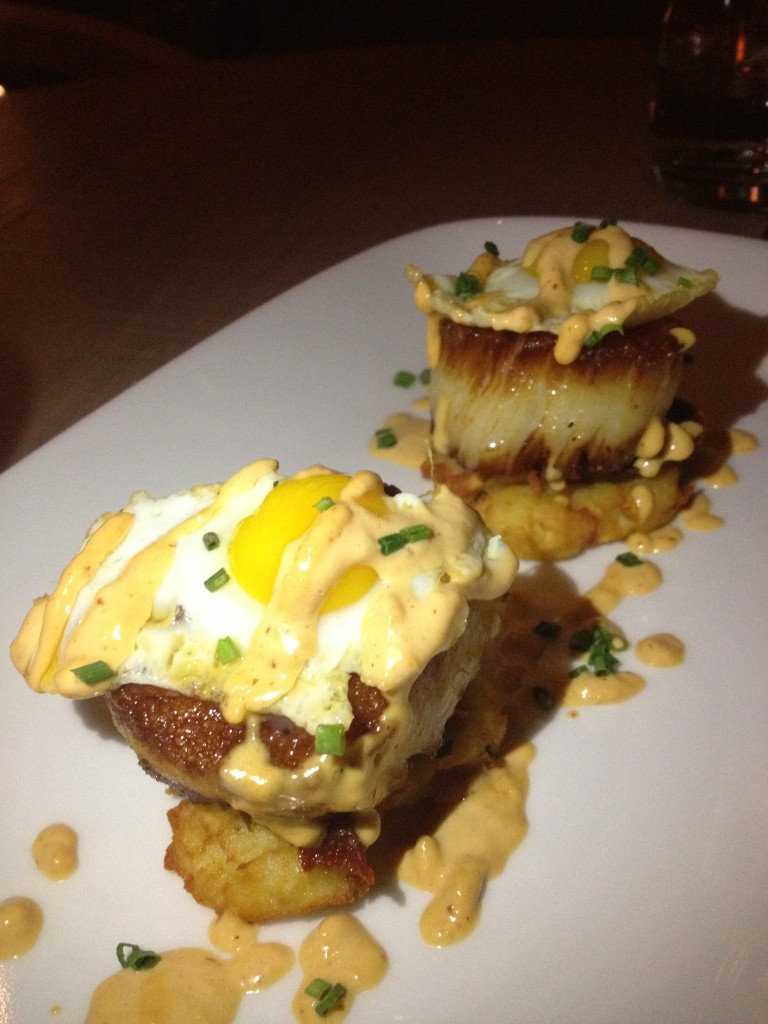 There may have been a bit of a theme in some of the dishes, which I would call overall acceptable, but some elements seem a bit forced.  There is an octopus ceviche, tangy with grapefruit and jalapeno, but cut FAR too chunky for super-thin taro chips.  We all know the embarrassment of going in for a scoop, breaking chip after chip, waitresses wordlessly bringing in steam trays full of new chips, wading hip deep in half-broken chips, boarding up windows to keep the chips in, until we hang ourselves in the bathroom with our underwear out of shame, Turkish prison style.  These are the dining problems Emily Post didn’t have the time or decency to address.

There were other nice dishes, and most very nice quality.  The short rib gnocchi and the shrimp tomato risotto were standouts.  The cocktail list and dessert menu were notably lacking the same spark that most of the menu had, which I expect shared a common cause: tacked on to please someone or some group.

The entrees you ask?  Are they just a scaled up tapas?  Well, yes and… mostly.  They’re still great, like most of the menu, but not huge.  There are a couple that boast their size (the steaks, naturally), but items like the lamb sirloin, are dinky.  At least the prices match, which are a good touch below the local par.  However, they can be mightily improved with some really thoughtful wine pairings from the in-house somme (I think he may have even been an MS).  Seriously, get a pairing, this guy is a wiz.

Oh, and they leave you with this cute little note on your receipt.  But I’m beginning to think it has nothing to do with DMB at all!  Song references aside, it is certainly a big step up from 90% of tapas places, with a menu that is overall far more exciting and original than anything you’d find shoehorned into Tivoli Village or even the much lauded (for the drinks, not the food) Downtown eatery scene.  Check it out, try some stuff, and seriously, get a wine pairing. 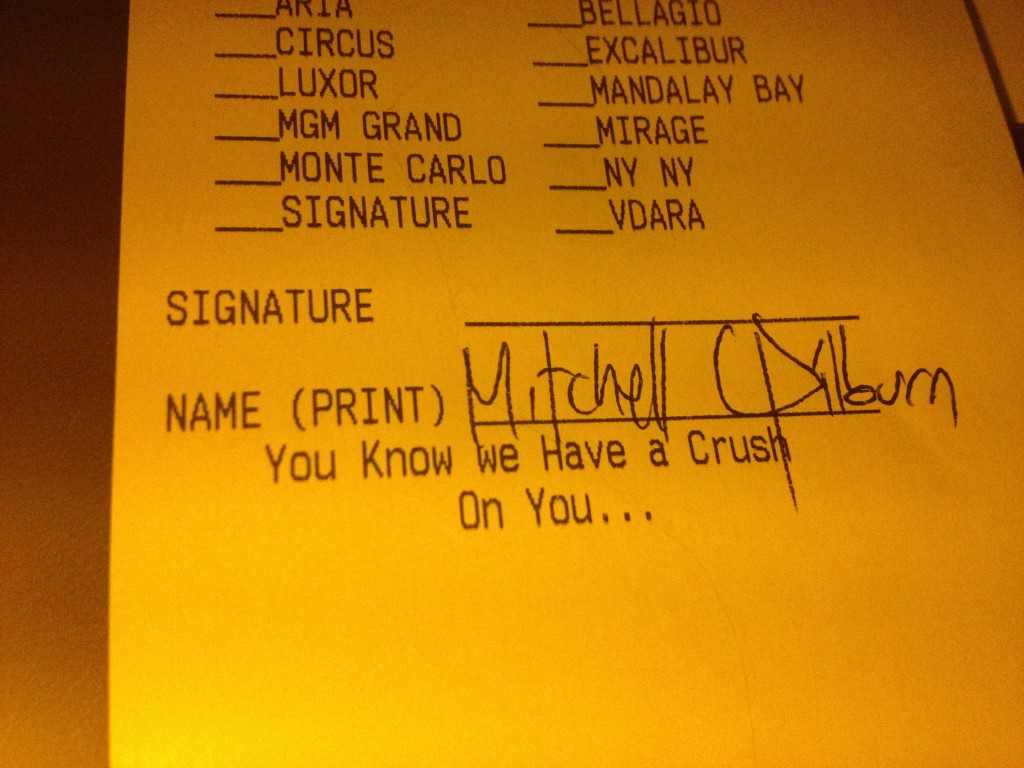 In the MGM Hotel and Casino