Over the past couple weeks, as is our position, Mr. Curtas and I have eaten out on our own, and have noted some new dishes of the season’s menu change that deserve their due recognition.  We’ve taken the best of the best and are bringing to you those that really struck a chord with us.

For anyone wanting to take up the fun little occasion of a “Dine Around”, this would be a great guide for it.  Why did I do a top 9 instead of a top 10?  Well, you could say that last spot is for YOU, dear reader, to tell me in the comments your top pick in new spring menu items.  I look forward to reading it, and maybe even trying it out for myself… 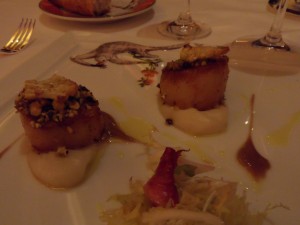 New Executive Chef Paul Lee is making full use of his new position as “fine dining guy to keep your eye on” by really veering away from the commonplace, the expected, and the national dining character itself.  While everyone is tripping over themselves trying to chip this and gelee that, Chef Lee is de-complexifying things.  These scallops were indeed scallops, but the specter of a spicy green curry and nutty roasted pistachios added to its natural sweetness and buttery flavor.  Each bite (I took mine with the endive salad) finishes off with nutty roasted Sicilian pistachios and tangy, umami tamarind vinaigrette.   It wasn’t in your face, but it was really in your head.  If I had to really describe it, it would be the difference between a pretty lady coming up and ripping your shirt off, and the same just giving you a wink from across the room.  Paul Lee is really exemplifying the maxim “Less is more”. 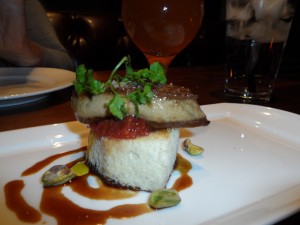 Foie Gras with Rhubarb compote – Public House in The Venetian:

Danged near everywhere, I’m seeing this massive influx of rhubarb, especially rhubarb and foie gras.  I think I’ve seen four in the past couple weeks that all had that same formula.  I think this was the best example of it (I have yet to try the Foie Gras w/ rhubarb 3-ways by John Courtney at Pinot Brasserie.) because of simply the quality of the brioche, the range in flavor of the compote and jus, and the technical precision of the foie.  Each bite had that livery richness, a perfect level of salt, not too much sweetness, and a beautiful blend of spice notes from the jus.  While I usually prefer to err on the savory side of the foie gras spectrum, this was a wonderful example of the sweet side. 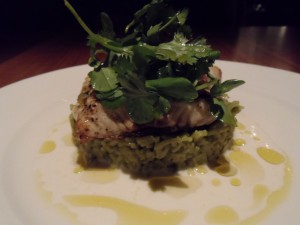 Grilled Barramundi – The Barrymore in The Royal Resort:

While I do share the skepticism Mr. Curtas has towards the hip new sustainable “Replacement fishes”, and generally consider them about as appropriate a replacement as a clown car is for fire truck, this is the first time I’ve had a Barramundi dish that went for a more traditional Thai style.  It’s done with a ginger-cilantro sauce and some preserved lemon, on top of coconut herb rice.  It’s not exactly a sashimi fish, so it makes for a solid canvass for the exotic palate of flavors.

I plan on doing a full article on the back-stage tour and beautiful meal I had just recently, but I’d like to include particular dish because of how incredible it was.  Firstly, you have these Dungeness crabs flown in weekly, living just a day or two before it’s on your plate.  Then you have these bizarre variety of avocado called “Surprise Avocado” from a California Farmers Market, which are about the size of an ostrich egg and have a creamy, tangy style to them.  Little bit of kumquat diced in the salad and sliced right on top, bit of butter lettuce, fresh cream and herbs for the crab, and you have one really interesting dish.  It showcases the oceanic flavor of the crab and contrasts it with the sweet and citrus-y bitter kumquat, becoming a fresh and almost addictive dish (Keith the Sommelier paired it with this lovely very northern Italian white: very crisp and minerality, complimented the crab perfectly).

I’m just not a fried chicken guy, and even less of a dark meat guy, but something about this ale-brined free range bird and the Tabasco Orange-Blossom honey made it so finger-licking good (seriously, it can get messy).  Super moist, so much more flavorful than the supermarket chickens that share more in common with tofu than a hen house, and fried perfectly.  Not oily at all, and the skin didn’t slough off like the Colonel’s will.  It’s rare to see it done well, and even rarer to see it without a DAMNED waffle underneath it, like some kind of superstitious “Diners, Drive-Ins, and Dives” watchers attracting totem. 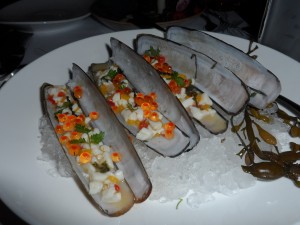 Remember when Comme Ça was going for that strange farm-to-table thing, and wasn’t really pulling it off?  Just a few months ago?  Well somebody wised up and flipped the danged script, because now they are no longer avoiding the Hoity-Toity that comes along with good french food (waiters are still wearing plaid, though).  Served in the shell, this mix of diced clam, diced peppers, citrus (a blend I think, couldn’t quite put my finger on it), and applewood smoked salmon roe had all the markings of unique modern French, and none of the “locavore” pandering.  The few ingredients struck a really nice “chord” of flavor. Refreshing, simple, and just really fun, it’s the start of a good trend at Comme Ça. 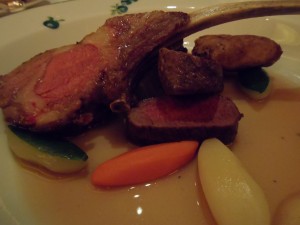 In the same vein as the scallops, this dish is an interesting turn on the rustic.  A perfect little braised shoulder medallion, a chop, veggies, and a full bodied consomme.  There’s also a bit of sweetbreads (another emerging trend), but done to avoid the overly salty way others can be.  Where the scallops were “complex but subtle”, this was “subtle but complex”.  This is one of those dishes where you can reset, clear your mind, and truly enjoy the natural flavors of well-sourced vegetables and meat.  If you can appreciate the classics, go for this one ASAP. 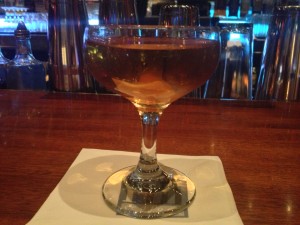 “The Flying Lariat” by Nathan Greene – RM Seafood in The Mandalay Bay:

With the growing, exploding high-end cocktail scene we’re seeing these days, I would be remiss in excluding this.  Nathan Greene just launched his seasonal cocktail menu, and on it his award winning Bols Genever cocktail.  For those of you still skeptical on the culinary versatility and ability of mixology, this is one that will convert you to a believer.  It’s a mix of the Bols, vermouth, aperitif wine, amaro, bitters, and just a touch of absinthe.  It has great balance, a classic dryness, modern complexity, and showcases each of the main ingredients well.  This one is on their bar-only “Secret Menu”, so be sure to come early to dinner or stay late.  Oh, and I found a neato little video of Nathan teaching you how to make it!  On top of a mountain no less… 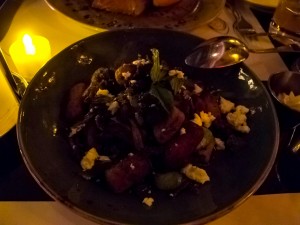 I wish I got a better picture to do this justice, but the darkest dining room on the strip holds no love for my bargain camera.  Dig this: 50/50 pâte à choux and Gruyère, rolled into little balls and cooked in brown butter, with house-made goat cheese, crisped up braised lamb neck, and mint.  This is Comme Ça being trying to be more French than Charles De Gaul as a mime eating a baguette surrendering to the Eiffel Tower.  Easily the fluffiest, lightest gnocchi I’ve had in town.  It’s beautiful, comforting food, and I really could eat it by the bucket.  Go there, get this, no matter what.